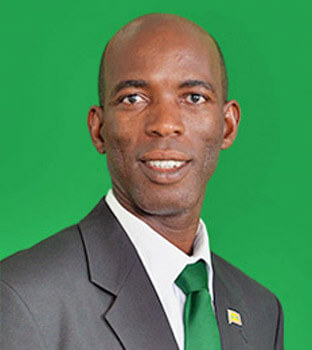 Father forgive them for they do not know what they do.

Opposition Leader Tobias Clement has used a biblical phrase to describe the current state of play in his St. George North-east constituency with the main opposition National Democratic Congress (NDC) of Dickon Mitchell.

The island’s main opposition party has apparently ended accommodation talks with Clement for the upcoming general election and decided to go ahead with its Assistant General Secretary, Ron Redhead as the candidate to contest the national poll.

THE NEW TODAY understands that Clement who won the seat in both the 2013 and 2018 general elections on a ticket of the ruling New National Party (NNP) came out on top in a recent poll commissioned by Congress but the two sides differed on the position adopted by the main opposition party that he should join as a member to be considered as a candidate.

The Petite Martinique-born politician denied reports in some quarters that he made demands to become the Number Two man in the arrangement that was being worked out with the Congress party for the upcoming general election.

“I did not make any proposal,” he said.

According to Clement, he suggested to Dickon Mitchell in their talks that he (NDC Leader) should draw up “a proposal and let me see where we are going…”

“I think one of the sticking points in the proposal … and I told them before that I was not going to join NDC and that was on the paper,” he said.

Clement indicated that his position all along was “where are you going with that … I could have an alliance with you guys and work with you guys.”

He went on to say: “I did not put any counter proposal, nothing like that was discussed (asking for the No.2 position). I did not discuss any position or arrangement with them – the only thing is let us win this thing.”

“In terms of position, I don’t really care about that. All that I wanted and want for Grenada is for us to put Grenada in a place where people could realise their full potential in terms of development,” he said.

“No, I never asked or sought or put any proposal on the table pertaining to me or anybody else. I have never discussed any proposal or any position whether in or out of government with anybody from NDC. To me that is not even relevant. My thing is if we could win the election, let us put the best foot forward so you could win,” he added.

The Opposition Leader dropped hints that he might have become a victim of an internal power play within Congress.

He said: “I do not know what is going on with NDC business. Whether or not the thing was hijacked, they have to put their house in order.”

Speculation is rife that some elements within Congress were not prepared to accommodate the Opposition Leader despite the talks being held by their leader with Clement and were pushing behind the scene for Redhead to go forward as the candidate in the election.

THE NEW TODAY is aware of moves afoot involving some persons including a close relative of Redhead to get him to withdraw and to allow Clement to go forward as the only other opposition candidate to contest the seat against NNP’s Nimrod Ollivierre.

Clement also debunked claims in some quarters that his demands to join up with Congress was so great that the party felt it could not deal with him.

He said: “I never made not a single proposal or even a demand from NDC. The only thing that I know is we could have an alliance but (not) in terms of joining NDC, you could mix with them but that doesn’t mean that you have to combine with them.

“In some instances I believe when you are dealing with people that are juvenile in their nature and their politics, they are not seeing the higher politics of having an alliance. You cannot win no election in any country without forming alliance with people.

You can work with them but it doesn’t mean they have to be part and parcel of you. I don’t think those guys (in NDC) understand politics or even that level of politics. If they did they would not have been in this mess now.”

Clement confirmed to THE NEW TODAY that he was still engaged in active discussions with Dickon Mitchell when NDC apparently took the decision that it was going forward with Ron Redhead and not him.

“…There was a proposal on the table,” he explained.

The Opposition Leader said the proposal on the table from Dickon Mitchell focused mainly on him joining NDC “and the conditions under which I should become a member of the party”.

“The main sticking issue really there for me and a no-brainer that in order for me to be a candidate with NDC, I must become a member of NDC,” he remarked.

According to Clement if he had to join NDC, he could have done so two years ago or since 2019 when he left NNP over differences with Prime Minister Mitchell whom he accused of increasingly exhibiting dictatorial tendencies.

He indicated that there has been no communication between himself and the new NDC leader since this turn of events on candidate selection.

“I have not called him. I think he was waiting for me to call him as to what was my decision, like I said which I was seriously contemplating … not seriously contemplating what I had to do … because it was almost a no-brainer I was not going to join NDC. I could work with them, I could have an alliance with them but that doesn’t mean I will lie in bed with you. That is what I was thinking about.

Even so, political decisions that are made should not be made on a whim or some fancy because it could have long term implications on everybody’s life. I think everybody is just rushing, rushing, wanting to be, without doing the proper analysis and calculations.”

Clement was also asked to comment on reports that as part of the arrangement he was working out with the NDC boss, he offered to help provide training to the candidates and others leading up to the election.

He said he offered “to give them all the training and all the know-how” for its team of candidates given the fact that he had been exposed over the years to a winning culture due to his association with the NNP and its track record in election on the island.

Clement is not optimistic that NDC will be able to win the St George North-east seat in a 3-way fight against the ruling party given the latest turn of events.

Asked whether he will still offer himself as a candidate before the electorate on polling day in light of the current situation of being overlooked by NDC, Clement said: “I will have to seek counsel. The thing about it (is) that a week, a day, a month in politics is a long time.”

The MP for St George North-east also reacted to suggestions made by some people that he should go on the offensive against Congress in light of how things turned out between them in the dialogue.

He said: “You know we say politics make strange bedfellows. You cannot burn bridges that you have not yet crossed and so one has to take the time and make good, critical judgement in terms of what you say. Even at this point in time, I would not say yea, say nay.

“What has to be done is a proper analysis on the way forward and I will also seek counsel on the way forward. That is how I have always operated because (in) politics you just don’t make decisions on a wind as somebody comes to you without thinking it, calculating and recalculating what you’re doing to do because what you do in this politics could affect you for the rest of your life.”

According to Clement, there is a major difference in someone wanting to run in an election as opposed to running and winning on Polling Day.

“Running and losing is the most dangerous thing because that can put you in a frame, state of mind that you can never come back from where you are,” he said.

The Opposition Leader also raised concerns whether any of the current crop of candidates selected by Congress for the election have won an election before and know how to win an election.

“That is what I was coming with,” he quipped.

According to Clement, an alliance between NDC and himself would have brought hope for the people in light of the upcoming general election and Grenadians would have seen NDC as a group that is not hegemonic and are now open to accommodation with others and can also form alliances.

He felt that he might have been able to deliver St George North-east in favour of NDC in the election as well as give them critical support on the sister isle of Carriacou & Petite Martinique where he has strong family ties and links.

He feared that the position taken to overlook him in the constituency can have a negative impact on the Congress candidate for Carriacou & Petite Martinique, Tevin Andrew.

He was optimistic that he could have delivered a sizable number of votes for the NDC candidate especially in Petite Martinique in the election but it is now apparent that “we are dealing with … people who are juvenile in their politics.”

Asked if there could be a rapprochement between himself and NDC for the election, Clement said: “I do not know like I say. I will have to seek counsel, I have to meet with my people …. as to really and truly decide how we are moving forward, if we’re moving forward at all and if anything (can be salvaged).

Clement was also asked whether the collapse of the dialogue with Dickon Mitchell and NDC will see him removing Dr. Tessa St Cyr as one of his Senators in the Upper House of Parliament.

Dr. St Cyr was presented on Sunday at a public meeting in Carlton Junction as the Congress candidate for St Andrew North-east seat against Minister with responsibility for Youth, Kate Lewis-Peters.

Clement said that no decision has been taken on the issue and it was a matter that he would seek counsel from those closely around him politically.

There are some people that have goggles on in their vision – they could only see one thing only but, no I will not go down that path.