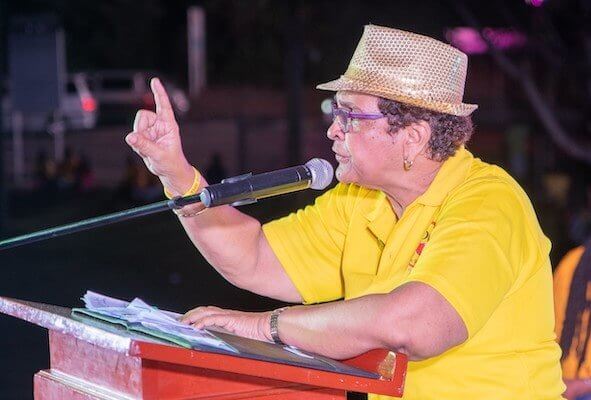 Franka Alexis-Bernardine – tendered her resignation as leader of Congress

Speculation was rife since early in the day that a major announcement will be made by Alexis-Bernardine about her future in frontline politics at an Executive meeting of Congress.

Hours later, the party’s General Secretary Glen Noel announced that the political leader had sent in her resignation to him on Wednesday citing concerns about her health due to rising stress levels.

Alexis-Bernardine was the third person to take charge of NDC since the party was voted out of office in 2013.

The then leader, Prime Minister Tillman Thomas stepped down from office and was replaced by the man who served him as Finance Minister, Nazim Burke who led the party into another massive defeat in the 2018 polls.

Burke relinquished the Political Leader’s post and his deputy Joseph Andall took over as the Interim Leader of NDC until Alexis-Bernardine was elected unopposed to the top spot about a year ago.

Caretaker candidate for St. David, Adrian “Persuader” Thomas is now expected to serve as the party’s Interim Leader until a convention is held to elect a new Political Leader for the party.

Congress’ first elected female leader was coming under increasing pressure especially from a party support group in New York which felt that NDC was not making significant political progress during the past year.

This development comes against the backdrop of signs that Prime Minister Dr. Keith Mitchell is preparing his New National Party (NNP) for the next general election with the holding of several Town Hall meetings around the island.

NNP insiders point to moves by Dr. Mitchell to offer top jobs to some party old stagers like Joan Gilbert as Acting Manager at the Maurice Bishop International Airport (MBIA) and the disgraced former Security Chief, Cletus St Paul as a key member of the Covid-19 contact tracing team.

According to a top party official, the “mantra of Dr. Mitchell is that all hands must be on deck for the elections” and that the re-emergence of the likes of St. Paul and Gilbert are clearing signs that NNP is preparing for an early poll.

Following is an edited version of the statement issued Thursday by the Congress leader in announcing her decision to bow out of frontline politics:

“It is with regret that I have taken the decision to step out of the politics for medical reasons.

My doctors have indicated that the stress levels are too high and I run the risk of shortening my life.

The stress is having a very negative impact on my health and has created a number of factors that will disappear if the stress factor is reduced. So I have little choice – for medical reasons I must resign from both positions.

The timing is good because one year ago to the month I assumed the responsibility of being the Political Leader and agreed to let it run for the period of about a year so that I could see how things developed and how things are proceeding.

I want to say that NDC will always be my party and it is largely because their core values and policies and ethical values are consistent with my own.

I believe in these concepts and ideas and philosophy – these are where my beliefs rest – transparency and accountability and above all putting people first. These are values that I am committed to as a person,” she said.

I wish the party well. I am right here and will lend whatever support I can when I can”.