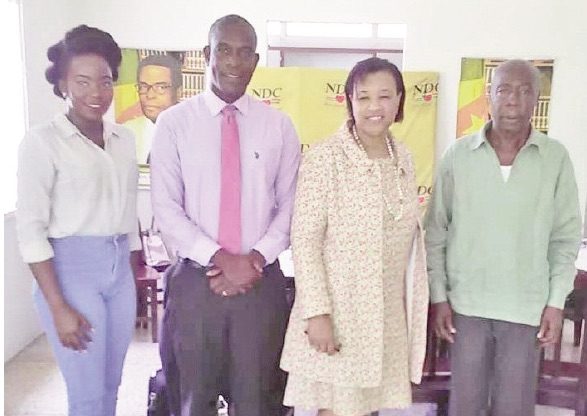 The NDC team raised concerns about manipulation of the Parliamentary Elections Office by the ruling party, and government’s failure to get the Governor General to assent to the 2016 amendments that were made to the Representation of the People Act.

The issue of censorship, intimidation and control of the press was also discussed, with specific references to the replacement of Lew Smith with Katisha Williams, a government senator, as host of GBN’s Beyond the Headlines, the appointment of an NNP activist to head the News Department of a private media entity and the refusal of several newspapers to publish the NDC’s Heartbeat column, even as they bring the NNP Perspective.

NDC acknowledged the passing of progressive environmental legislation, but lamented government’s actions which pose direct and immediate threats to the local environment.

Sen. James highlighted concerns about the poor state of healthcare in general, and mental health in particular.

She addressed the need for better training and awareness regarding the handling of sexual abuse and harassment, as well as a reorientation of the education system so that young people can be better able to take advantage of existing opportunities.

Baroness Scotland commended the NDC for allocating the two senate seats offered by the Governor General to two youths.

The Secretary General spoke of several Commonwealth programmes and initiatives that young Grenadians can benefit from.

She was also made aware of the high levels of victimisation meted out by the NNP administration to young people who support or are members of the NDC.

Both delegations agreed that there should be follow up actions on the matters raised by Congress.