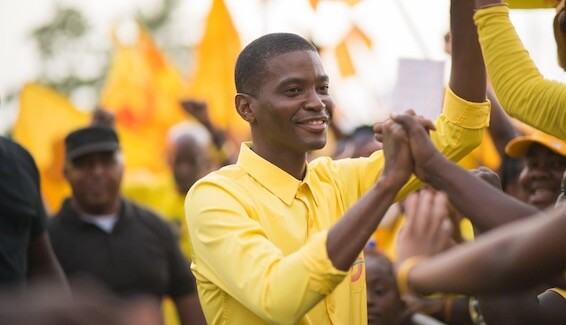 It was a historic victory for Dickon Mitchell who was running in his first general election after taking over the leadership of the party eight months ago.

James, a former Grenada Senator, has now become the youngest female to be elected to serve in Parliament in the sub-regional grouping known as the Organisation of Eastern Caribbean States (OECS).

Hundreds of Congress supporters swooped down on the compound of Dickon Mitchell’s campaign office at Red Gate in St David with flags and posters in hand to celebrate the victory which brings an end to the political life of Prime Minister Mitchell which spanned half-a-century.

The biggest casualty on the NNP side was its Number two man, Finance Minister Gregory Bowen who fell to newcomer Phillip Telesford, an accountant by profession.

In a comment to THE NEW TODAY, Noel said: “It’s a resounding victory based on the wishes of the public for change and economic and social transformation. They are tired with the same old and embrace change, youthful energy and the vision of the new leader Dickon Mitchell who connected emotionally and his message resonated with the people.

I think the NDC made the transition at the right time in understanding the generational fatigue and actually heard the call of the Grenadian people and embraced new leadership.

We just want to say good bye to Keith Mitchell and to usher in a new Prime Minister and wish him and his team well as they seek to implement their vision and plan for moving Grenada forward and transforming the economic and social life of the people.”

The NDC is moving into the La Sagesse playing field for a victory rally at 9.00 p.m, to celebrate one of the most remarkable victory in general election on the island.

No information is available on whether PM Mitchell has conceded defeat at the polls and call Dickon Mitchell to congratulate him on the victory of Congress in the general election.

However, General Secretary of the NNP Roland Bhola has conceded defeat and has congratulated Dickon Mitchell on the victory.