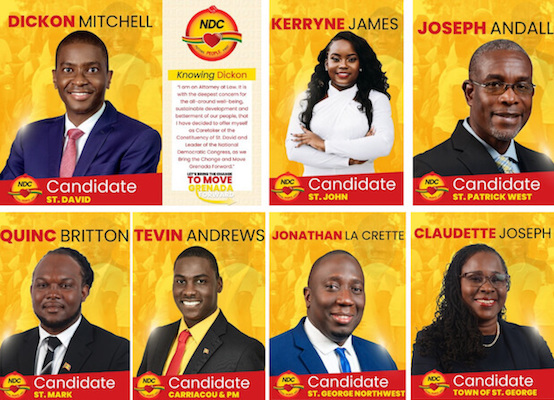 This event was the first in a series as part of the party’s preparation for the upcoming General Elections, constitutionally due in 2023.

As part of the thrust to lead the movement for change that Grenada badly needs, four  of the seven Candidates named are first time contenders and four are youths.

Political Leader, Dickon Mitchell, who is an Attorney at Law, will be the new Candidate for the Constituency of St. David. Since becoming Party Leader on October 31st 2021, Dickon has demonstrated that he is indeed a change leader.

His visionary leadership, calm, deliberate and assertive way of getting things done, are already proving to be transformative for the NDC. These qualities will be invaluable as Team NDC moves towards transforming Grenada, Carriacou and Petite Martinique, under his leadership.

Tevin Andrews, will lead the NDC’s winning team in the Constituency of Carriacou and Petite Martinique.  Tevin, like the other youth Candidates, came through the ranks of the organisation from Branch Chair, to Youth Arm Chairman and now, Party Chairman.

Tevin is currently a small business owner, who is among the best examples of the party living by its pledge to position capable young people, who are willing to work hard, at the heart of the decision making process.

In government, the NDC will continue to place young people at the forefront of national development and transformation.

Joseph Andall hails from Chantimelle, St. Patrick. He is an accomplished educator who is a specialist in the teaching of Spanish and the training of teachers of Modern Languages.

Andall is an alumnus of Samaritan Presbyterian School, Chantimelle R.C. School, Grenada Boys’ Secondary School and T.A. Marryshow Community College. He holds a Master’s degree in Modern Language Education from the University of the West Indies and a Bachelor’s degree in Political Science from Morehouse College, as well as postgraduate diplomas in Hispanic and Latin American Studies. He is fluent in Spanish and has varying degrees of competence in other languages. Mr. Andall is a long-standing member of the NDC and has served the party in many capacities including Interim Political Leader.

Quinc Britton, a son of the Victorian soil, who has been a youth activist in his community, was named Candidate for the Constituency of St. Mark.  An active member of the youth arm of the party, Quinc is also a leader in the Constituency Branch. Professionally, he is trained in music and has tutored in music theory. Quinc is now employed as a Manager in a private sector entity in the auto rental industry.

Former NDC Youth Senator, and current Chairperson of the National Democratic Youth Movement (NDYM), Kerryne James, will be the party’s Candidate for the Constituency of St. John.

Kerryne is a Graduate of the St. George’s University and in 2018, became the youngest Senator in the Commonwealth of Nations. Kerryne intends to continue to be a role model and inspiration to young people, particularly women in her Gouyave community and nationally.

Mr. La Crette, who hails from Fontenoy, is also an OECS Commission SDM Ambassador and one of our fresh youthful faces. In addition to his vibrancy, Mr. La Crette comes with vast professional experience and personal accomplishments.

In the Town of Saint George, prominent Attorney-at-Law, law lecturer and senior martial arts instructor Claudette Joseph will contest the seat for the second time.

Claudette, who was born and raised in the Town, is one of the most dependable members of the team and has been a leading advocate of the party’s principles and policies. She is also a champion for the issues dear to the people of the Constituency.

The NDC intends to have its full slate of Candidates announced in the coming weeks. Our team is comprised of Grenadian patriots with vast and varied skillsets and areas of competence, who are equipped to move our Grenada forward to prosperity, through transformative programs and policies.

We join with our Party Leader, in asking all our people to ponder on this question: “If the current leaders of Grenada have not been able to transform our country positively in the last thirty years, will they be able to do so now?”

This is why, NDC urges the people of Grenada to come along with us. Let us together Bring the Change and Move Grenada Forward!

(The above was submitted by the main opposition National Democratic Congress, now headed by attorney-at-law Dickon Mitchell)