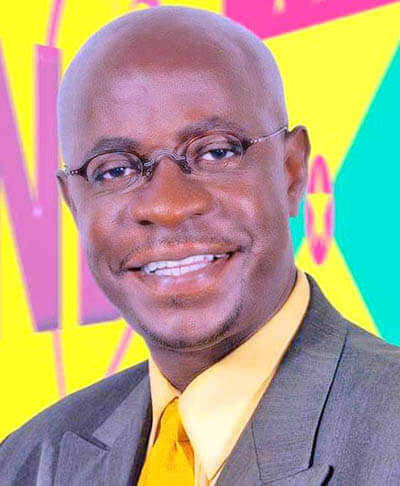 Nazim Burke – enjoyed a victory in court against PM Mitchell

“The protection of fundamental rights against arbitrary or excessive infringements is an essential feature of constitutional governments”.

Those were the words uttered by Court of Appeal judge, Justice Louise Esther Blenman in a ruling against the Keith Mitchel-led New National Party (NNP) and in favour of former Finance Minister, Nazim Burke.

The case involves a breach of the constitutional rights of a Pakistani man who married a Grenadian woman, by Prime Minister Mitchell in his capacity as Minister of National Security.

Within hours of returning to power after the 2018 general elections, Dr. Mitchell ordered Muhammed Ehsan deported from the island after a foreign intelligence agency provided information linking him to terrorism.

Ehsan retained the services of former Attorney General, Rohan Phillip of Lex Fidelis law firm to prevent the extradition but he was bundled out of the island without a hearing.

In handing down his judgment, the high court judge ruled that the Pakistani should be brought back to Grenada at government’s expense and that he should be awarded compensation of over EC$175, 000.00.

With attorney Phillip now serving as a judge in St. Lucia, the matter was argued before the Court of Appeal by Burke who came up against a team of State lawyers including Solicitor General, Dia Forrester and St. Kitts-born lawyer Frank Walwyn who operates out of Canada.

As a public service, THE NEW TODAY reproduces an edited version of the judgment handed down November 27 by the Court of Appeal against the Mitchell-led administration in St. George’s. 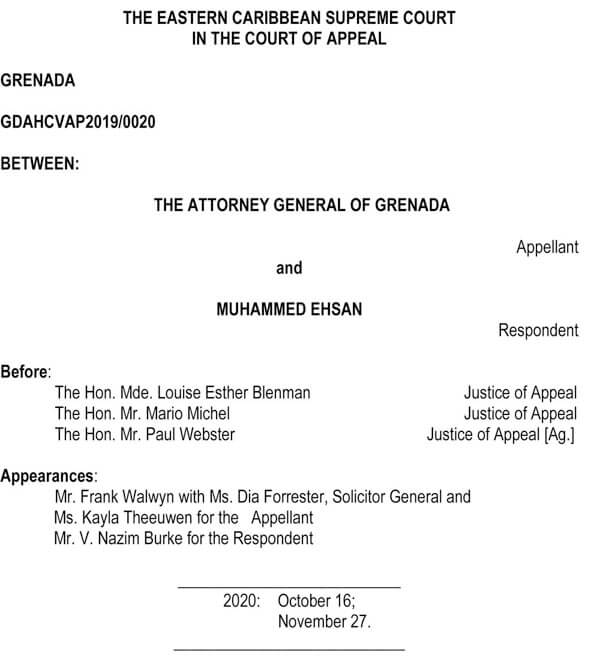 Civil appeal – Constitutional law – Section 8(8) of the Constitution of Grenada – Right to protection of the law – Certificate of Registration as citizen of Grenada issued consequent to marriage to Grenadian citizen – Section 9(2)(b) of Citizenship Act of Grenada – Power of Minister to deprive citizen of citizenship in the interest of national security – Revocation of respondent’s citizenship by Minister pursuant to section 9(2)(b) of Citizenship Act – Whether section 9(2)(b) of Citizenship Act, by excluding the right to be heard and informed of the grounds for revocation of citizenship, infringes section 8(8) of the Constitution and violates right to natural justice – Whether learned judge erred in concluding that Minister’s revocation of respondent’s citizenship, without affording him a hearing was unlawful – Whether the learned judge erred in concluding that the respondent’s constitutional rights were breached by the State of Grenada due to his deportation, arrest, detention and seizure of his passport – Constitutional redress –

In February 2015, Mr. Muhammed Ehsan (“Mr. Ehsan”), a Pakistani by birth, married a Grenadian woman, who was a citizen of Grenada by birth. Mr. Ehsan was living and working in Grenada and applied pursuant to section 98 of the Constitution of Grenada (“the Constitution”), to become a naturalised citizen on the basis of his marriage to a Grenadian.

Before approval was granted, the Permanent Secretary in the Ministry of National Security, Disaster Management, Home Affairs, Information and Implementation (“the Permanent Secretary”) wrote to Mr. Ehsan’s then counsel stating that his application for citizenship had not been granted as a consequence of an adverse due diligence report regarding Mr. Ehsan.

This caused Mr. Ehsan’s legal representative to formally write the Permanent Secretary, indicating that Mr. Ehsan was unaware of the due diligence report, or from where it emanated, and that Mr. Ehsan had a constitutional entitlement to citizenship consequent to his marriage.

The Ministry of National Security then responded, by letter, that Mr. Ehsan’s application was approved and a Certificate of Registration as a citizen of Grenada, dated 22nd March 2018, was issued to him.

Subsequently, the Minister responsible for Citizenship, received confidential information on which he determined that Mr. Ehsan presented a real risk to the State of Grenada, and without any communication to Mr. Ehsan in relation to the issue of national security, purported to act pursuant to section 9(2)(b) of the Citizenship Act (or “the Act”) and revoked Mr. Ehsan’s citizenship. Thereafter, the Minister for Immigration issued the Deportation Order and Mr. Ehsan was detained by the police for several days with a view to his pending deportation from Grenada.

Mr. Ehsan challenged his arrest and impending removal from Grenada and successfully applied for an ex parte injunction in the High Court which prohibited his removal from the State of Grenada. At the inter partes hearing of the application, on 27th April 2018, the judge discharged the injunction.

Mr. Ehsan filed a constitutional claim on that same day seeking a number of declarations, orders and damages including vindicatory damages. Mr. Ehsan contended that the actions of the Minister responsible for Citizenship and the Minister for Immigration breached the principles of natural justice as he was given no opportunity to be heard prior to his citizenship being revoked; and his constitutional rights to due process and protection of the law under section 8(8) of the Constitution.

He further challenged the constitutionality of section 9(2)(b) of the Citizenship Act to the extent that it derogated from the principles of natural justice in cases where the Minister is satisfied that it is in the interest of National Security to deprive a person of citizenship, and therefore that section 9(2)(b) infringed section 8(8) of the Constitution.

The learned judge granted a number of declarations including a declaration that the specific wording contained in section 9(2)(b) of the Citizenship Act excluding subsections (5) and (6) infringed section 8(8) of the Constitution and is therefore null and void. The judge also awarded Mr. Ehsan damages for loss of earnings, wrongful arrest and detention together with vindicatory damages.

The Attorney General being dissatisfied with the decision of the learned judge appealed to this Court. The issues that arose for this Court’s determination were:

(i)  whether the learned judge erred in concluding that section 9(2)(b) of the Citizenship Act contravened section 8(8) of the Constitution of Grenada and also violated Mr. Ehsan’s right to natural justice;

(ii) whether the learned judge erred in concluding that the Minister’s revocation of Mr. Ehsan’s citizenship, without affording him a hearing was unlawful;

(iii)  whether the learned judge erred in concluding that Mr. Ehsan’s constitutional rights were breached by the State of Grenada due to his deportation, arrest, detention and the seizure of his passport;

(iv) whether the learned judge erred in awarding damages for wrongful arrest, detention and the seizure of Mr. Ehsan’s passport; and

Held: Dismissing the appeal; affirming the decision of the judge below save and except that the awards of $25,500.00 for loss of earnings and $155,000.00 in vindicatory damages is set aside and in its stead, a total sum of $50,000.00 in vindicatory damages for the breaches of Mr. Ehsan’s constitutional rights is substituted; ordering costs to Mr. Ehsan in the sum of two-thirds of the amount awarded in the court below; and making the orders set out in paragraph 140, that:

(i)   the objective is of sufficient importance to justify limiting the right; and

(ii) there is proportionality between the objective and the measure used to achieve it.