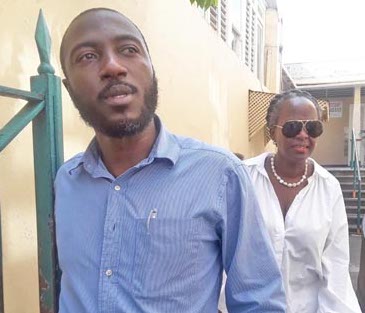 The dispute between the Mt. Pure water company and the state-controlled Spicemas Corporation (SMC) challenging the exclusive rights awarded its competitor Glenelg to sell water at SMC organised events came up for hearing at the Civil Court on Monday.

Lawyers for both sides came out of the court session without getting a date from the sitting judge to hear the matter, which could have some bearing on the upcoming carnival season in August.

Civil High Court Judge, Justice Agnes Actie who presided over the matter when it came before her at the No. 3 High Court on Monday proposed that the two sides should come back sometime in June.

This did not go down well with officials of Mt. Pure, who are hoping that the company would be allowed to sell its water at SMC-organised Carnival events.

The company is being represented by Attorney-at-Law Ruggles Ferguson, who indicated to the court his intention to seek an earlier date for the hearing of the matter but Justice Actie took the decision to leave it to the Supreme Court Registrar to set the next hearing date.

In an interview with THE NEW TODAY on Monday, Attorney Ferguson acknowledged that “given the number of matters before the court, the judge did not fix a date and left it up to the Registrar to set one.

“It seems dates are difficult to get and that’s one of the challenges,” he said, noting that Carnival is already fast approaching.

“What we are trying to do is to coordinate to get the earliest date possible,” the attorney said, adding that it is “likely (that) a hearing date of the matter could be June 2020, which is late but in the meantime once all the documents are in what we will try to do is coordinate with the Registrar to get an early hearing date because I think it’s in the best interest of all the parties.”

One of the Managers of Mt. Pure, Ian Thomas, who also spoke with THE NEW TODAY on Monday, explained why it is so critical for a decision to be handed down in the matter before June.

He said: “Carnival is coming up and we have to get our house in order to be ready for just in case the court decides that the tendering process that was exhibited last year should not be recognised this year and give us the opportunity to vend as a Grenadian company within that same space.

“We would have to make preparations for the purchase performs of our covers and such because it takes a while to get here because it comes all the way from the East. So, if we have to sit and wait on the court to make a determination after June, then it would mean preparing for next year Carnival,” he added.

In July last year, Mt. Pure, through Attorney Ferguson filed judicial review proceedings and an interim injunction against SMC, claiming that the decision taken by Spicemas to award Glenelg exclusive selling rights is illegal and can have negative impact on the business venture which is conducted on The Carenage in St. George’s.