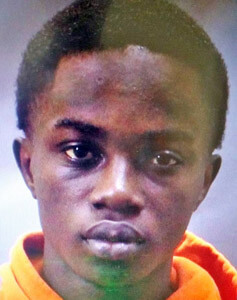 Shamoy Fahie - is the third St. Andrew resident to be slapped with the indictable Robbery with Violence charge in the recent weeks

Another St. Andrew youngster is facing an indictable Robbery with Violence charge as police investigators clamp down on a 20-year-old suspect, identified as Shamoy Fahie, in connection with an incident inside the MoneyGram Foodland Market Square outlet in the heart of the Town of St. George, which was robbed at gunpoint of $15, 899.00 last week Monday.

Fahie, who is described as an Online Trader from the Northeastern village of Paradise, St. Andrew was apprehended by police last week Tuesday, after video footage of the daring daylight incident went viral on social media.

THE NEW TODAY understands that the suspect is originally from Mt Horne in the St Andrew North-west constituency but relocated to Paradise in rented quarters.

On the same day, two (2) 22-year-old men from the village of Telescope in the Southeastern part of the parish, posted $100, 000.00 bail on similar charges in connection with the November 8 gunpoint robbery of the Big Mac shipping agency at Calliste in which 35, 000.00 was reportedly stolen.

Accompanied by Attorney-at-Law Brandon La Touche, the youngster appeared before Chief Magistrate Teddy St. Louis at the St. George’s No.1 Magistrate’s Court last Week Friday, where he was also granted $100, 000.00 bail with two (2) sureties, with no objections from the Police Prosecution team, led by Assistant Superintendent of Police (ASP) Glen Charles.

However, the Chief Magistrate decided to attach strict conditions to the bail, ordering the 20-year-old suspect to surrender all travel documents and report daily to the Grenville Police Station.

Fahie was also instructed to have no contact with the witnesses in the matter, which has been adjourned to December 8.

Attorney La Touche, who previously served as Crown Counsel in the Office of the Director of Prosecution (DPP) indicated to the Court his intention to proceed with a paper committal, which means that the matter against his client would go straight before the High Court for adjudication instead of through a Preliminary Inquiry, which is the process that determines whether the suspect should be committed to stand trial in the High Court.

Speaking at a press conference in St. George’s last week Friday, Officer in Charge of Crimes, Superintendent of Police Vannie Curwen confirmed that the monies that were stolen during both incidents have since been recovered.

According to Supt Curwen, the RGPF has since responded to the attacks on the business community by “meeting with business owners to discuss their safety, and security and that of their staff and establishment.”

He also reported that a “mandate” was also given to “divisional commanders to engage the communities in a similar manner” and “business owners wishing to engage with us (the RGPF) in this regard are encouraged to do so.”

There are also reports that the robbery suspect was due to leave the island for England within hours of the MoneyGram robbery.