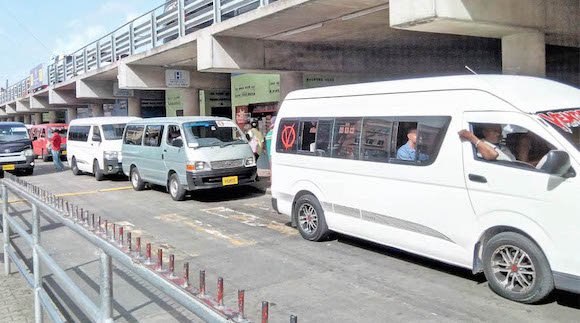 All buses except those on Zone 5 which is on the western side of the island will be working today.

According to a well-placed source, this is one of the decisions taken at a meeting Sunday involving the Presidents of the various bus associations on the island that operate under the umbrella of the National Bus Associations (NBA).

Talks between bus operators and the Keith Mitchell-led ruling New National Party (NNP) government were put on “halt” last week by the administration which took issue with a press conference held by bus operators to air their grievances in public.

The National Bus Association (NBA) was reprimanded by Acting Permanent Secretary in the Ministry of Transportation, Anna Brizan who accused them of not showing good faith in the negotiations by taking the issue into the public domain.

The source said that coming out of Sunday’s meeting of the various Presidents of the bus associations around the island, it was agreed that only a limited number of buses plying the Sauteurs to St. George’s route will be out on the road due to existing problems that are still to be resolved.

He told THE NEW TODAY that the Zone 5 buses will operate mainly in the early period of the day with some of the buses doing only a morning trip and then staying off the road.

He said the busmen on this side of the island are the ones most affected due to the current impasse with the Keith Mitchell-led government for an increase of $0.50 on the route and some other proposals put forward to the regime for consideration including a gas rebate.

“It’s really difficult for them. It’s real tough for them. I’m not lying, it hurts to hear what these men are going through,” he added.

According to the source, the plight of the Zone 5 busmen is compounded by the fact that they have to pass through a much deteriorated longer route in the Mt. Moritz hills to get into the city.

The normal route has been out of use for over five months now due to the collapse of a sizeable position of the main road in Moliniere in Prime Minister Mitchell’s North-west constituency.

Government has not given any precise information on when the road will be put back into operation.

According to the busman, it is just not economical for the Zone 5 bus operators to provide a full service to the public throughout the day.

“The road isn’t good. It’s just not. All the buses on that side won’t be out in full effect like normal,” he said.

The busman denied suggestions that the national association has lost the battle and that the Mitchell administration now holds the upper hand in the ongoing struggle.

“I don’t think busmen have ever been so united … I haven’t seen it before…,” he said.

He pointed out that “the guys are on point” and have been working hard and do understand the cause of the struggle now taking place.

He said the busmen “are on board” with the struggle that is being waged to secure a better deal for themselves.

“We analysed and we came up with some new plans in moving forward,” he added.

The busman did not go into specific details on their next move but was confident that the association members will continue to remain united in the fight for a better deal.