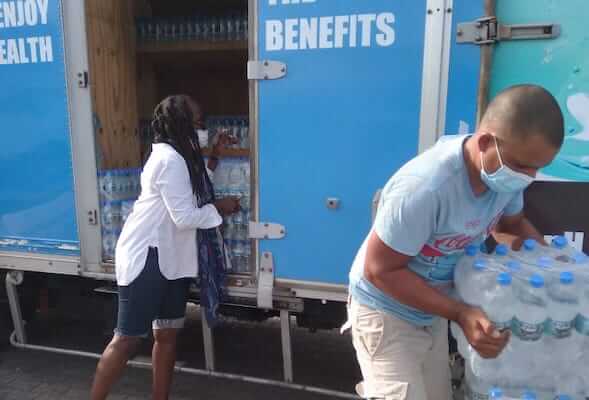 The Grenada Union of Teachers is among local organisations that are sending humanitarian relief to the people of St Vincent today.

The water is being supplied by Mount Pure Mineral Water Company which is partnering with groups, organisations and individuals to respond to the call for drinking water for St Vincent where the La Soufriere volcano has been erupting over the past few days.

Mount Pure has received orders for close to 700 cases of water, including the Grenada Bar Association.

The water is being sent to St Vincent this evening aboard the Bequia Express which was scheduled to dock at Grenada Caricom Wharf at 3pm.

The company itself has also pledged 100 cases of water and CEO Rolanda Mc Queen has said she will direct that it be provided to the children of St Vincent.

Pledges have also come in from Grenadians in the diaspora.

Mc Queen said they have increased production at the bottling plant to ensure there is enough water to supply the humanitarian relief effort and local consumption.

Activity at La Soufriere has forced the shutdown of the island’s water supply because of severe ash fall from the volcano which has gone through a number of explosive eruptions since Friday.

More than 16, 000 people have been evacuated as a result and today more evacuations were expected from the Leeward side of St Vincent to the less affected Windward side – the St Vincent Coast Guard was expected to lead the evacuation around midday.