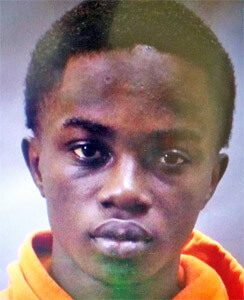 A 20-year old youth from Paradise in St Andrew has been charged by Police for the robbery at the MoneyGram office in the city on Monday morning.

The suspect, identified as Shamoy Fahie, appeared Friday before Chief Magistrate Teddy St Louis at the St. George’s No.1 Magistrate’s court, now operating in its new location inside the CLICO Building on Young Street.

Fahie was charged by police for the offence of Robbery with Violence and Money Laundering in relation to the MoneyGram incident.

THE NEW TODAY understands that police investigators were able to retrieve virtually all of the money stolen from the business place.

Video footage of the robbery circulated on social media within minutes of the incident.

It showed a male with a hat on his head, his face covered with a black Covid-19 mask walking inside the building and ordering a female employee to hand over the money.

THE NEW TODAY understands that the staff member told police officers that the man informed her that he had a gun in his possession.

Another video footage showed the suspect picking up stacks of money and placing them into a bag and issuing instructions to keep quiet and not to say anything.

Police investigators were always confident of nabbing the suspect given the number of CCTV cameras in strategic places in the city.