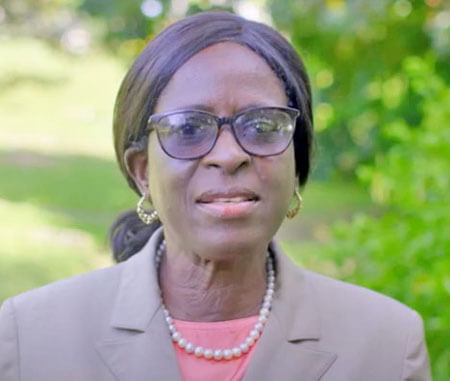 Speaking on GBN’s “To The Point” programme, the senior government minister said she recognises the concerns in some quarters about the possibility of government defaulting on the Chinese loan but is confident about the ability of the Maurice Bishop International Airport (MBIA) to handle the repayment.

Minister Modeste-Curwen stated that over the years, the airport, named after the island’s slain revolutionary Prime Minister, was able to make good on paying back monies that were borrowed.

“I am aware that this is a very difficult time that maybe the volume of passengers that we have enjoyed coming in and going out of MBIA, we may not get to do the level immediately,” she said.

However, the minister said that one has to plan in “quiet times” so that when the “busy times” do come around MBIA can take advantage of the investment undertaken through the Chinese loan.

Grenada was forced to close MBIA in March in the wake of the coronavirus pandemic which was sweeping across the world and leaving millions of dead and infected persons from the virus.

The US$67-million loan comes from the government-controlled Exim Bank of China and the Chinese company, China Harbour has been awarded the contract for the two-year project.

The MBIA expansion work will involve the construction of a second runway and additional aprons, resurfacing of the existing runway, an emergency centre, lighting, passenger bridges, two-way by-pass road, escalators and elevators.

According to the female Member of Parliament for the rural St. Mark constituency, she is confident that the Grenada team of negotiators which included persons from the Ministries of Finance and Works did a good job with the Chinese and that the island was “well treated” by the Chinese in the negotiations.

“Our confidence is based on the skills of the negotiators with the team with the loan facility,” she added.

Minister Modeste-Curwen who said days earlier that she was hopeful Grenada will repay the Chinese loan “By the grace of God”, pointed to moratorium in which the island will not have to make any payments on the loan to the Chinese for some years.

She said there is something called a “moratorium where we do not have to pay back immediately – that will give us some time to recover and start generating serious funds to do that”.

In addition, the government minister indicated that the Chinese government has been very generous in its dealings with St. George’s since the two countries re-established diplomatic relations in 2005.

She made mention of China’s involvement in the rebuilding of the National Sporting stadium at Queen’s Park for the 2008 cricket world cup, as well as the number of the low-cost housing projects in several parishes around the island and “other things that they had assisted us with”.

“…I must say from our experience the Chinese have been very helpful to us. I do not want to say too much – I don’t want to go off track less I be misquoted or be misunderstood but the fact remains that their dealings with us have been very much above board,” she remarked.

Minister Modeste-Curwen disclosed that the upgrade of the airport at Point Salines is necessary as the island needed “to do these things – to be on the cutting edge to be competitive”.

“If these things are not done, we would again be on the verge of downgraded and not be able to operate until these things come into force,” she added.

This is reference to the recent downgrade of MBIA due to the lack of fire-fighting aggregates which resulted in British Airways and Virgin Atlantic cancelling some of their flights to the island.

The senior government minister threw out a challenge to those who are not supporting government on taking the Chinese loan.

She said: “Persons may know of a better source of funding and if so am sure that the government would be prepared to listen. I haven’t heard of any recommendation as to where to go but I do know that we need this (loan from the Chinese)”.

When questioned on reports that China had taken over some vital assets in countries especially in Africa that had defaulted on their loans, the Grenada Minister said she had heard these reports but was not in a position to address those issues.

“I personally cannot say that I am deeply troubled but one has to be conscious that there is always something that happened somewhere and like I say I cannot speak to it but we have to be careful about what happen in our own country,” she said.