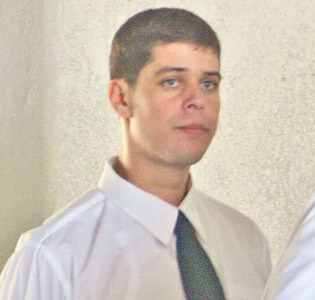 After serving only 12 years of a 67-year jail sentence for the murder of his wife Nixiann Downes-Clack, 27, of Duquense, St. Mark, British national Alexander Robert Clack became a free man on Tuesday when the Court of Appeal declared a permanent stay in his appeal due to the unavailability of transcripts from the Supreme Court Registry to proceed with his appeal.

The decision was made by His Lordship, Justice Davidson Baptiste, the Acting Chief Justice, along with Her Ladyship, Madame Justice Margaret Price-Findlay, and His Lordship, Trevor Ward, when the matter came up before the Court of Appeal.

Court documents state that the conviction, and sentence be quashed, and a verdict of acquittal entered, or that the applicant’s sentence is commuted to manslaughter, and the sentence reduced to time served.

Clack was charged with Non-Capital Murder for the June 17, 2014 death of his wife of four (4) years, and the mother of his daughter, who was dumped into a black suitcase, found buried in a shallow grave at Mt. Moritz, St. George’s.

An autopsy report revealed that she died of blunt force trauma and asphyxiation by strangulation.

Clack, who had led police investigators to the spot where he had buried the body, was convicted, and sentenced two (2) years later in February 2016, in one of the toughest sentences to be handed down by Justice Paula Gilford at the St. George’s No. 1 High Court, upon the conclusion of his 3-month murder trial.

He was represented in the matter by Attorney Anslem Clouden who had expressed the view that the sentence was “usually high in terms of years,” and proceeded to file an appeal.

Clouden told reporters on Tuesday that several status hearings were held since the appeal was filed in 2016 but the matter could not proceed as the Supreme Court Registry was unable to provide the transcripts of Justice Gilford’s summation of the case before the jury retired to deliberate on the verdict.

The lawyer told reporters that Supreme Court Registrar, Xiomara Forsyth, had informed the court that the “computer that had the recording was stolen.”

Clack had been in custody at the Richmond Hill Prison for 12 prison years, which is equivalent to eight (8) calendar years, six (6) of which he awaited his appeal.

In the absence of the transcripts, the Court of Appeal could not decide as to whether the sentencing judge made an error or dealt with the matter properly, and turned down Senior Crown Counsel Howard Pinnock’s request for a retrial.

The matter has been removed from the list as Clack, who has exercised his right to appeal cannot remain in prison indefinitely.

Commenting on this development in an exclusive interview with THE NEW TODAY on Wednesday, the Director of Public Prosecution (DPP) Christopher Nelson QC, acknowledged that this episode would “certainly would leave a bitter taste in the mouths of many.”

“It is a failure that has serious implications, the immediate, and obvious is the fact that accused persons who have been convicted, and who are in a similar position could (also) be released from custody. That is a serious matter for us because the public needs to feel assured that when persons are convicted that the convictions can be confirmed, and they are made to serve their time (and) failures in the system like this will affect that. I think that is the major consequence,” he said.

Sources say there has been a longstanding issue at the Registry with court transcripts being prepared late, and in some cases, convicted persons would have even served their sentences before their transcript is ready.

However, this is the first time that the failure to provide a transcript of the trial in a murder case has resulted in a convicted person being released from custody.

Attempts made by THE NEW TODAY this week to contact the Supreme Court Registrar for comments on the issue proved futile.