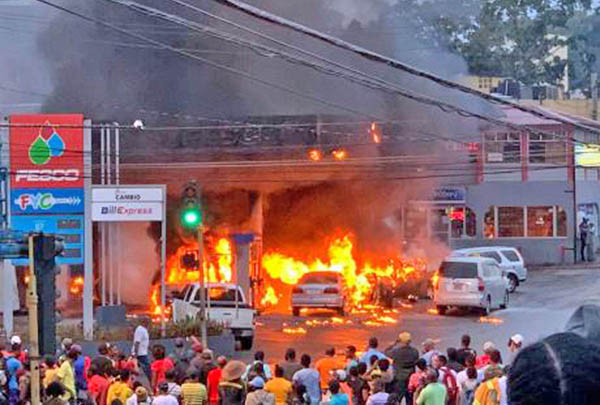 The Grenada government of Prime Minister Dr. Keith Mitchell missed out on “a golden opportunity” to provide medical assistance to St Vincent when three residents on Union Island got serious burns from a fire at a Gas Station on May 19.

According to a Grenadian residing on Union Island, the authorities in St. George’s should have made a gesture to St. Vincent to take the injured persons to the hospital on Carriacou for urgent medical attention and then possible down to Mainland Grenada.

He said that Union Island is only 20-minutes away from Carriacou by speed boat and the injured persons would have been able to get much quicker medical treatment from Grenada rather than having to wait three to four hours for a boat to come from Mainland St. Vincent to take them back to the Milton Cato General Hospital.

He stated that this is the kind of assistance that should be taking place among the islands in the Grenadines rather than imposing restriction on movement of the people due to the coronavirus.

He pointed out that the restriction on travel imposed by the Mitchell government prevented these persons from being transported to Carriacou or even Mainland Grenada which is closer in proximity than Mainland St. Vincent.

“Because of the foolishness between Keith Mitchell and Ralph Gonsalves, they had to bring a Coastguard from St. Vincent when they could have just run over to Carriacou or Grenada with these people,” he told THE NEW TODAY.

“Now the three people are dead because of some “foolish rule” that one of the Prime Ministers in particular has put in place,” he said.

The ruling administration in St. George’s has offered to refuel the UniGas gas station, the only one on Union Island.

Prime Minister Gonsalves has accepted the offer but said that it has to be done in a “structured manner” in which Grenada is required to get the gas into St. Vincent and then have it shipped down to Union Island.

The Grenadian who has been working and living on Union Island disclosed that despite the restriction of people imposed by the Mitchell administration, residents from Petite Martinique did go over to the neighbouring island controlled by St. Vincent to offer assistance to help put out the fire.

“…We couldn’t bring them to Grenada”, he said for urgent medical attention, “so, these three people had to wait for a Coastguard to come all the way down – five hours from St. Vincent when we could have easily brought them over to Grenada.

He went on to say: “Union Island is the same distance to Grenada as is Carriacou. We are closer to Grenada than we are to St. Vincent”.

According to the Grenadian, St. Vincent does not have any facilities to deal with badly burnt victims and if Grenada had offered a hand they could have been taken at a much quicker pace to Carriacou to get immediate medical treatment for the burns.

“…The people … had to wait for a considerable period of time to get any medical attention,” he remarked.

Alexander who sustained second and third degree burns was airlifted to Trinidad and Tobago for medical attention at the Southern Medical Clinic in San Fernando but died a few days later.