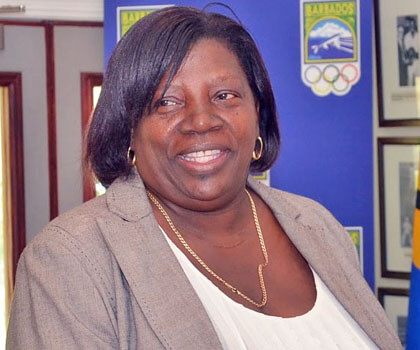 Veda Bruno-Victor has caused a stir among local sporting enthusiasts

Efforts are being made to broker a peace deal between two warring factions within the Grenada Olympic Committee (GOC).

THE NEW TODAY understands that veteran sports journalist Ray Roberts is spearheading the attempt to get one faction led by the longstanding President of 38 years, Royston LaHee to meet with the other faction involving Deputy Chairman of the Finance Committee, Ralph Lord to resolve some critical financial issues now dominating agenda items up for discussions.

The GOC Council met on Saturday amidst heated exchanges between officials of both sides on a report submitted by Lord who investigated alleged financial discrepancies involving EC$440, 000.00 given to the local sporting body by Olympic Solidarity (OS), an arm of the International Olympic Committee (IOC) for the development of sports in the country.

The La Hee-led group which includes the controversial General Secretary, Veda Bruno-Victor challenged some aspects of the financial report as inaccurate but did so only verbally and not in writing.

There are reports that delegates in attendance decided to give them additional time to do so and also to meet with the members of the Finance Committee to address their claims of discrepancies in the report.

In the report, fingers were pointed at Bruno-Victor for allegedly violating a number of financial rules including the sending of GOC employees to make cash withdrawals from a local commercial bank and not leaving behind a paper trail on the spending of the funds.

The GOC General Secretary was also identified as the one who hired her husband to engage in work for the committee and then signing his payment cheques.

Bruno-Victor had faced similar accusations about 20 years ago when she was a member of the Board of Directors of the Grenada National Lottery Authority (GNLA) and then handing over some of the funds to the then Minister of Sports, Adrian “Spaceman” Mitchell.

Local Olympic chief, Royston LaHee did not answer several calls made to him by THE NEW TODAY for comment on the report from the Finance Committee.

As a public service, THE NEW TODAY brings Part 2 of the Finance Committee report on discrepancies discovered in the use of GOC funds:

Maintenance and Retention of Accounting & Other Records:
Granted that the GOC is an NGO and exempt from paying income tax; nonetheless, we recommend that it should be guided by the provision of Section 71(4) of the Income Tax Act of 1994 (As amended), which stipulates that “every person to whom this section applies shall preserve all books of account and other records which are essential to the explanation of any entry in such books of accounts of that business for a period of seven years after the end of the basis period to which such books of account or records relate”.

It went further to state that the Comptroller may; by notice in writing require any person to retain such records …. For such further period of time as he or she deems necessary …

Indeed, we further recommend that based on the enormous truth reposed on those who volunteer their services to manage the affairs of the GOC, and the pivotal and crucial role it plays in the sporting life of the nation’s youths and its international relations with the comity of nations and international sports bodies, it should retain its accounting and other records for a minimum period of ten years. Where, for any reason, the GOC wishes to dispose of its accounting and other records, it should seek the approval of 2/3 voting members the council.

Conclusion
There needs to be a deeper and more comprehensive look into the state of affairs relative to the other programmes of the GOC.

The GOC Board of Directors knowingly ignored the financial reporting guidelines as outlined by the IOC for the period under review.

The Directors premeditatedly misled the Auditor, PWC, in their Management Representation letters.

In the letters, signed by both the President and the General Secretary, they represented that “all records, documents, statements and significant information” were made available to the PWC and that they have “complied with the guidelines of each programme … “.

If these were indeed correct as they claimed, the IOC wouldn’t be demanding for a refund and there wouldn’t have been need to submit additional justification/supporting documents to the IOC after the audit exercise. We believe these misrepresentations portray the GOC in a bad light before the IOC officials and may likely trigger another audit. We also believe the misrepresentations are responsible for levity and skepticism with information coming from the GOC is being treated to the extent that many supporting documents presented by the GOC have indeed been rejected by the IOC.

It is our considered opinion based on what we would have reviewed that if another audit is commissioned for the subsequent year, that is 2017 to 2020 fiscal period, the GOC may fail the audit and find itself in a similar, if not worse position.

Demand for a Refund by the IOC: We wish to point out that at the time of preparing this draft report, we were unaware that the GOC received any communication from the IOC that supersedes their previous position on their demand for a refund of the amount that the GOC has been unable to justify. In any event, it appears inevitable that the GOC will make some refund to the IOC as the Directors of GOC have been unable to provide tenable justification for some items of expenditure that were audited by the PWC.

Given the fact that the available evidence points to gross negligence on the part of the GOC Directors with pertinent knowledge of the IOC grant and prescribed expenditure guidelines and procedures, the GOC FC hereby recommends that the Grenada Olympic Committee Inc. should not be responsible for refunding the amount being demanded by the IOC nor bear the consequences emanating from the Directors’ negligence in any way, shape or form.

While the above observations are in no way exhaustive, addressing them satisfactorily will augur well for the GOC and it will help to safeguard the assets of the Committee and enhance to the reliability of its accounting system.

A Note of Gratitude
We wish to place on record our sincere gratitude to the Council members for the confidence reposed in us and for the opportunity given to us to be of service to GOC on basis of volunteerism.

Kingsley Ashby – Substantive Chairman (but recused himself from this inquiry to avoid conflict of interest as he is also a member of GOC BOD);

Claudia Francis –  Member who recused herself midway into this inquiry.