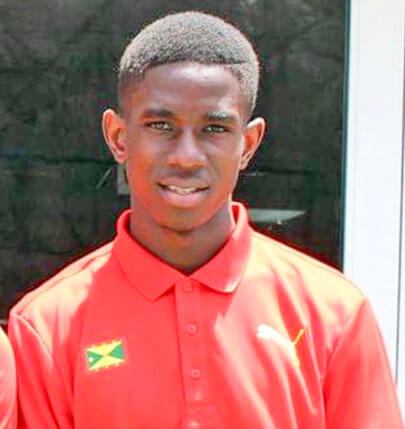 Officials in the Ministry of Sports in Grenada are upset with claims made by the family of rising 400 metre US-based runner, Gamali Felix that he is not getting a monthly stipend of US$500.00 from the authorities on the island.

According to a ministry official, there is no Grenadian athlete on scholarship in the United States who gets US$500.00 as a monthly stipend from the ministry especially if that person is on a full scholarship as provided by the foreign school.

She told THE NEW TODAY that at the onset of the coronavirus a year ago, all the local athletes who were away on assignment got some financial assistance of around US$250.00 each from the Ministry of sports.

She said that the U.S schools were closed and they had a meeting with the athletes on the Zoom platform and the session focused on the plight of the athletes and their present situation and the decision was taken to send the US$250. 00 to each of them.

The official disclosed that Gamali was already in Grenada and was not qualified to get the money on offer from the Ministry of Sports.

“I think it was once he got it when he was up there,” she said.

According to the official, Felix will have to start running the 400M in sub-45 secs in order to qualify for funding from the Grenada Olympic Committee (GOC) under the Olympic Solidarity (OS) programme that is funded by the International Olympic Committee (IOC).

She said that the winning time of 46.63 secs done by the local athlete in winning the 2021 NJCAA national indoor championship in the United States last month is outside of the qualifying time for funding.

She stated that Felix still has a chance to run under 45 secs in the summer in an outdoor meet when the times are usually faster than on an indoor track.

THE NEW TODAY was told by the official that the Ministry of Sports will often assist local athletes with expenses incurred such as purchasing airline tickets and in travelling to Barbados to obtain visas to travel to the United States to pick up their scholarships to attend college and universities.

The official from the Ministry of Sports pointed out that there are several Grenadian athletes who are currently receiving financial assistance from the IOC in their athletic pursuits such as world Javelin Champion, Anderson Peters.

The official said the policy of the Ministry of Sports is to provide help to all the students who get overseas scholarships.

She stressed that the ministry along with the GOC will give assistance to the athletes especially whenever the Olympic Games are just around the corner.

“Every year the IOC will ask to submit the names of potential athletes for scholarships, Grenada will submit names and IOC will send back and say who are the people that will get scholarships,” she said.

The official was also asked to comment on reports that several local athletes who did not meet the IOC qualifying times were still able to get financial support with their training.

She admitted that this did happen when Grenada was trying to put together a 4 x 400 relay team for the Tokyo Games later this year and the island was putting together a young team of promising athletes.

She said that these athletes did manage to get on the IOC programme for financial assistance but in the end Grenada did not qualify among the top 16 countries in the world with a 4 x 400 team for the Olympic Games in Tokyo.

“They brought in the young men who had potential – they were close (to the 45 secs barrier) – they were running well but didn’t qualify for the 4 x 400,” she added.

According to the sporting official, not all of the athletes who were identified to form the 4 x 400 relay squad got financial assistance from the IOC but some might have received help from the Pan-American Sports Organisation.

The IOC normally picks the top 16 teams in terms of times in the world to qualify for the event at the Olympics.

In the wide-ranging interview, the Ministry of sports official acknowledged that the IOC did pay local coaches to look after some of the home-based athletes through a special programme that was funded through OS with GOC.

The GAA reportedly had a programme where they sent coaches around the various parishes to look for potential and talented athletes to be assisted from funds made available by the IOC.