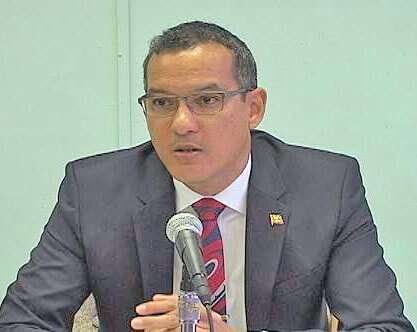 Minister Steele - no two applications are the same

Health Minister Nickolas Steele has struck a note of defiance regarding a decision to approve home quarantine for two Americans who arrived on the island infected with COVID-19 and breached quarantine protocols.

“We stand by our decision and we would do it again” a defiant Minister of Health said at a post-Cabinet briefing Wednesday morning.

The couple, a doctor and his wife, who arrived in Grenada on November 1, were able to go to their home in Lance Aux Epines without any means of monitoring them for the duration of their initial five-day quarantine period.

They were not outfitted with GPS trackers which under the Emergency Powers Act is legally mandatory for home quarantine.

During that time they visited at least five different establishments, including four restaurants in the South of the island.

According to the Minister of Health, the couple tested negative at the airport when a COVID-19 rapid test was administered.

“The assumption of the team that a medical doctor – a retired, experienced medical doctor could be trusted to home quarantine, cannot be criticised at that point in time. On hindsight we would have like to have a different decision.

But to have trusted a doctor who had a house here in Grenada, to stay here I cannot fault the team at that point for making that decision. But there appears to be some level of inconsistency in deciding on who can be approved for home quarantine.

In one instance, another medical doctor, a Nigerian, was not allowed to go into home quarantine and told that he must spend four days at a State-approved facility.

The Nigerian doctor was living in a private, gated property where he would be the only occupant.

Minister Steele told reporters Wednesday that he relies on the judgement of the health team that is responsible for reviewing and deciding on applications for home quarantine from inbound travellers.

“If another doctor applied they would not have been granted simply being another doctor. It would depend on the location of the accommodation as well.

“When we made the decision to grant this individual home quarantine we are standing by it and we’re saying we made a judgement which on hindsight we probably would make again because of the criteria that was met.

“Where in our wildest imagination we would say that an experienced doctor would be irresponsible.”

Minister Steele said he does not believe that another doctor was denied home quarantine, adding that “there are other conditions that also have to be met so no two applications are the same…..

“So I just think we need to rely on the team. That they are using their discretion to grant the privilege of home quarantine where they see the risk to be worse or limited ….”

Applications for home quarantine are approved based on age, location of home, a negative PCR test a week old or less, and having no one else resident in the property during quarantine.