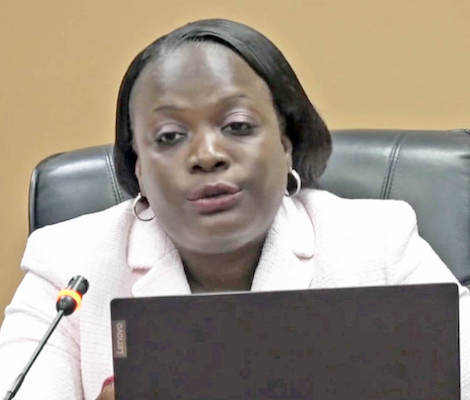 A call has been issued for young people interested in participating in the Youth Parliament to register for the new session, which is scheduled to begin next month, amidst speculations of there being a handpicked selection process for registration and overall participation.

“We have already made the call for interested young people to register for this new session of the Youth Parliament, which will begin in April,” Minister with responsibility for Youth Development in the Office of the Prime Minister, Kate Lewis-Peters, told the weekly post-Cabinet media briefing in St. George on Tuesday.

According to Minister Lewis-Peters, over 120 young people have received training, and participated in the just-concluded session of the National Youth Parliament, which is geared to provide a platform for young aspiring parliamentarians to debate on national issues in a parliamentary setting.

During the 2022 budget debate in the Upper House of Parliament last December, former facilitator of the Youth Parliament, and Opposition Senator, Dr. Tessa St. Cyr expressed concern that “some persons would never get the opportunity to participate” as “in some cases, participants in the Youth Parliament were being handpicked” for participation in the initiative, which encourages youth participation in the decision-making and legislative processes and cultivates public speaking and leadership skills.

However, Minister Lewis-Peters who expressed optimism that “we would have more young people training in this current year,” outlined the selection process in response to questions posed by THE NEW TODAY over concerns that were raised by Sen St. Cyr, and have been among topical issues debated in some quarters.

According to the female government minister, it is customary for the Ministry of Youth to “put out an expression of interest, or a call for young participants, which is advertised heavily via the social media page, radio, and television platforms, so that young people become aware that there is a call for new participants.”

She pointed out that youth officers are also out in the field daily where they come “into contact with young people who will express their interest to them.”

The minister explained  that interested individuals are interviewed after filling out the application forms, and are also allowed to “begin training,” after which “we select the top people for the parish Youth Parliament, and subsequently the national youth parliament” where they are “engaged for three (3) sittings.”

She added that selected participants will get the opportunity to debate on “acts recently passed, bills and resolutions that are currently before the Houses of Parliament, matters being considered for legislation, and matters being discussed publicly in the media”.

However, Sen. St. Cyr holds the view that the “National Youth Parliament should be broadened” and expressed dissatisfaction that “announcements are not sufficiently made to invite participation, and argued that “availability does not equal access” as while “the Youth Parliament is available, it is not accessible to all our nation’s youth.”

“…This should not be the case,” she said, in her contribution to the 2022 budget debate adding, “some among you know what is going on, and you say nothing.”

Minister Lewis-Peters was also probed on the registration process for participants under the new Imani programme, which has been called into question and alleged to be politically aligned.

She refuted claims that participants are selected by members of parliament without an official vetting process before acceptance into the next batch of trainees, noting that there is an Imani secretariat for the filling out of applications.

She also defended the process stating that while the Members of Parliament (MPs) have to review the list of applicants “to say that the MPs are the ones submitting the list is not entirely correct.”

“We do have the Secretariat who will present the list of applicants who have expressed interest as well as those coming through the constituency offices,” she remarked.

Concerns have also been expressed that persons allegedly have to be supporters of the ruling New National Party (NNP) to be accepted into the YUTBIZ entrepreneurial youth programme formerly known as the Grenada Youth Enterprise Initiative (GYEI) within the Ministry of Youth Development, Sports, Culture & The Arts, which is aimed at creating employment among youth between the ages of 18 to 35 through enterprises.

Minister Lewis-Peters has defended the application process giving assurances that young people will be given a fair opportunity to participate in YUTBIZ, and all other programmes being offered by the Youth division.

She explained that “YUTBIZ was advertised heavily so that young people can be aware and given a fair opportunity.”

In addition, she stressed that instead of contacting the division, some people opt to “go directly to their MPs who were elected to represent them, as well as through the constituency office” to register, which has been a trend also observed with registrants expressing interest in the Youth Parliament at the parish and national levels.