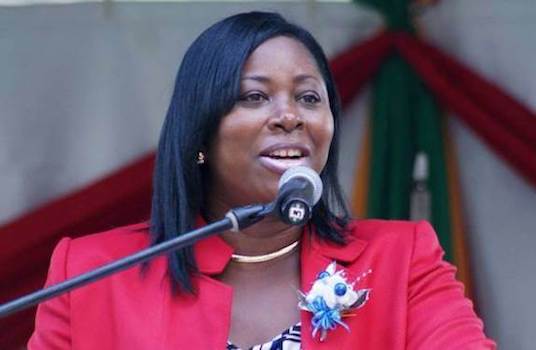 Education Minister Emmalin Pierre has announced plans to implement “a special initiative” to address the poor performance of Grenadian students in the subject areas of Mathematics and English A, in the Caribbean Examination Council (CXC) Caribbean Secondary Education Certificate (CSEC) Examination, which is below the regional performance levels.

Minister Pierre made the announcement during Tuesday’s post-Cabinet press conference days after the results of the May/June CXC CSEC exams were released showing a decline in the pass rate for both subject areas, compared to last year.

Figures released showed that 2,606 candidates were registered to write this year’s exams and that 1, 839 students registered to sit Mathematics, which was the lowest-performing subject, this year.

Minister Pierre, who did not provide an in-depth analysis of the results, gave assurances that “before the end of October, a public statement will be made” on the issue.”

The senior female government minister used Tuesday’s post-cabinet media briefing to highlight several areas of concern, including the issue of “exam readiness (and) the pressure that students are often placed under when they have to prepare (for exams) within a very short time.”

She also expressed concerns that “a number of our students are reading below their grade level…long before COVID-19.”

“Extremely critical for us is what’s happening with some of our students while we continue online learning, said Minister Pierre, who identified the low performance among some students, and the challenge teachers are having in creating quality content for online learning, and the non-engagement of some students in online learning, among the issues raised during a consultation with education stakeholders and the Ministry of Health last week.

“…We also have the students at risk, psychosocial issues as well as domestic issues,” she said, adding that “there have been several reports, and concerns expressed as it relates to abusive minors by older siblings and relatives (and) inappropriate sexual activities”.

“And, we have even had reported in the previous period, three (3) known cases of pregnancy among primary school students, the suspect attempted suicides, accidents in some cases, or at least one (1) that I am aware of leading to death during school hours, and reports of students loitering in various places during school hours,” she told reporters.

The Minister who outlined a new phased approach to the reopening of schools starting November 1, is optimistic that this will help to ensure that those most at risk, will have an opportunity to be more closely monitored, assessed, as well as meaningfully engaged.