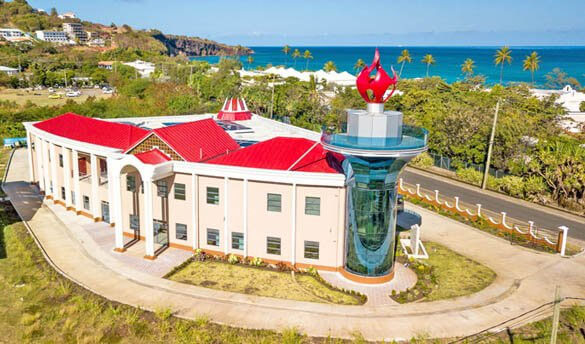 Longstanding sport administrator Veda Bruno-Victor was singled out for committing several acts of financial wrongdoing by a committee that was appointed to look into the financial affairs of the Grenada Olympic Committee (GOC).

THE NEW TODAY has obtained the copy of the report that was done by a select body, headed by Deputy Chairman of the Finance Committee of GOC, Ralph Lord, a former school teacher with the Grenada Boys Secondary School (GBSS).

The probe was ordered after GOC was unable to account for nearly half-a-million dollars in grant funding it received from Olympic Solidarity (OS), an arm of the International Olympic Committee (IOC) to help with the development of sports in the country and has asked for the unaccounted money to be paid.

The report comes amidst growing dissatisfaction with the operations of GOC, headed by long-standing President of over 38 years, Royston LaHee and for the holding of fresh elections in a bid to unseat the current controlling executive.

Within recent months, five of the nine members of the Board of Directors resigned from the committee, accusing the La Hee-led executive which includes retired banker, Kingsley Ashby and Private sector executive Charlie George of holding back information from them on the dispute with OS on funds made available to the organisation.

In the damning report, the Finance Committee pointed to the Falsification of documentary evidence and inflated invoicing, as well as Conflict of interest in which Bruno-Victor was signing cheques and paying her husband, Martin Victor, a former policeman for work done for GOC.

According to the report, Bruno-Victor had been sending two staff members in particular to make bank withdrawal of GOC funds and bringing it to her directly and not leaving a paper trail behind on how the funds were spent.

In addition, the report made mention of discovering what it called “inflated invoicing” that were sent by GOC to the IOC auditors in order to try and justify the spending of the funds.

It identified the following:-

As a public service, THE NEW TODAY has decided to highlight an edited version of the Lord report on the GOC financial debacle.

Pursuant to the responsibility assigned to us, the Grenada Olympic Committee Inc., Finance Committee, hereinafter referred to as GOC FC, to conduct an inquiry into the circumstances that led to the IOC request for justifications of some items of expenditure incurred by the GOC from 2013 to 2016, and subsequent demand for refund of the amount that cannot be justified, we wish to report as follows:

Preamble:
The GOC FC notes with concern the attempts that were made by the GOC Directors to frustrate its efforts to execute its assignment to the extent that we were denied access to the use of the Olympic House conference room facility when we needed it the most.

Our meeting that was scheduled to take place at the Olympic House on April 10, 2021, could not take place at the venue because we were denied access to the facility on the day of the meeting. This happened despite the fact that the General Secretary was duly notified of our scheduled meeting through the official communication channel as mandated by Council.

Notwithstanding, the General Secretary insisted that no member of the Finance Committee should be given the electronic access card save and except a particular member even though the member in question served us a notice that she would be reporting late after attending the General Meeting of her association on the same day.

GOC FC Remarks:
We view the action of Madam Secretary General as insulting and indeed a direct attack on integrity, dignity and person of members of the GOC FC. This is particularly worrisome, when the conference room facility in question is usually made available to the general public for rent.

Indeed, to the best of our information, it has been rented to the general public in the past and they were entrusted with the electronic access card. We are, therefore, left with no alternative but to conclude that we were denied access to the facility because of the ongoing inquiry and by extension attempt to discourage us, frustrate the process and hinder the inquiry.

Preliminary Findings, Observations and Recommendations
Having examined some of the books and records of the GOC, we have reasons to believe that some, if not all, of the demands, recommendations, comments made by the Auditor engaged by the IOC and the IOC itself are tenable and justified in the circumstance as summarized hereunder.

We have also included in this report some of the key accounting, internal control and ethical issues that we observed during our inquiry.

We share the recommendation of the IOC in its letter of November 27, 2020, when they “asked” the GOC “to limit cash payments to a bare minimum”. This is because during the period under inquisition, the GOC withdrew not less than $91,519.00 (Ninety One Thousand, Five Hundred and Nineteen Dollars) as cash expenses.

We wish to add that the majority of these cash transactions took place under the Holiday Recreation Program.

We wish to point out that cheques were written, principally in the name of two staff members of the GOC, who, as we were made to understand, simply delivered the cash withdrawn to the Secretary General upon their return from the bank.

It is also worth to point out that of all the cash cheques written during the period under review, 52.38% of the cheques were written in the sum of $5,000.00! This is at the heart of the current IOC demand because once cash withdrawal is made, it loses audit trail unless there is a sophisticated petty cash system in place to capture the disbursement particulars.

We are not aware that petty cash system is in place and in use at the GOC office during the period that we reviewed.

Falsification of documentary evidence and inflated invoicing for the IOC Auditor

The GOC FC interviewed a sample of the coaches mentioned on the document all of whom denied ever being contracted by the GOC to participate in the program much less being paid the amount indicated on the document.

Stipend Paid to Some Directors/Elected Officials:
During the period that we examined, GOC records revealed that not less than $143,884.64 (One Hundred and Forty-Three Thousand, Eight Hundred and Eighty Four dollars and Sixty Four cents was paid to some of the directors of the GOC. The cheques were written in favour of the directors involved.

The GOC FC notes that the amount above was not reimbursement for expenses incurred on behalf of the GOC.

Our external investigations reveal that, in most part, when National Olympic officials are invited to international conferences, their travelling expenses are usually paid by the parent body and they are also paid a stipend or per diem. Consequently, the GOC FC is of the opinion that stipend expenses are deserving of further analysis particularly because GOC official are not supposed to be compensated for their services, which are provided on the basis of volunteerism.

The Need for Prudent Management of GOC Resources:
During our inquiry, we discovered that the sum of $535,106.00 was remitted through Renwick & Thompson (Western Union) to scholarship recipients and oversea based athletes with the associated remittance charges/commission.

During the period being reviewed, GOC banker, the Republic Bank, was offering a “Reloadable Visa debit card” product to students studying in foreign jurisdictions which allows customers to load up to USD$5,000. This is in addition to international debit and credit card products offered by the bank and other financial institutions in Grenada.

It is the considered opinion of the GOC FC that had those charged with management of GOC resources accessed these products for some of the students on scholarship, GOC would have saved an enormous sum of money from Western Union remittance charges which would have added value to the GOC as an entity.

Likewise, savings would also have accrued from wire transfer remittances to scholarship recipients and other athletes in different countries.

Conflict of Interest
The GOC FC came across instances where those elected and charged with the responsibility of managing GOC affairs should have recused themselves from some transactions that border clearly on conflict of interest.

The GOC FC is of the conviction that the GOC should incorporate conflict of interest policy into the Committee’s internal Control manual which among other things will ensure that GOC does not conduct its affairs in an unethical way and its officers, immediate families, persons of interest, etc, do not benefit unduly from the funds of the Committee.

Data Security & Business Continuity
Upon commencement of our engagement, we discovered that the GOC does not have a QuickBooks Accounting file for the period we were assigned to review, that is January 2013 to December 2016.

Upon inquiry, we were informed that the office computer suffered a mishap and lost their entire computer based files including the Quickbooks file for the period under review.

We were also told that it was the second time they would have suffered from such a mishap, and on each occasion they did not maintain any form of Backup and recovery system for the GOC financial information.

This was rather highly troubling and disheartening to the GOC FC that no lessons were leant from the first unfortunate experience which would have constrained those charged with management of the Committee’s affairs to institute even the most rudimentary data recovery system by using external backup devices that is available in the market for less than $50.00.

It took two consecutive hard drive failures before the GOC directors authorised the office to purchase one USB flash drive which is now being used to back up the QuickBooks file that was created in 2017 or thereabout.

We recommend that, in the interim, at least two external backup devices be purchased and deploy for use by the office. One should be used to back up any updated file, Quickbooks or otherwise, on a daily basis, whereas the other, which should be in the custody of a director, should be used at least once a week.

The one in custody of a director should be kept outside of the office to avoid exposure to theft, flood and fire incidents in the office. A long term approach would be to explore the “cloud solution” to data security.

The Mammoth Challenge:
Given the extra layer of challenge occasioned by the absence of system based accounting system, the GOC FC was constrained to process the manual accounting records of the GOC, including cheque stubs and bank statements, from January 2013 to December 31, 2016, to create a database from which we established historical trend to prepare this report.