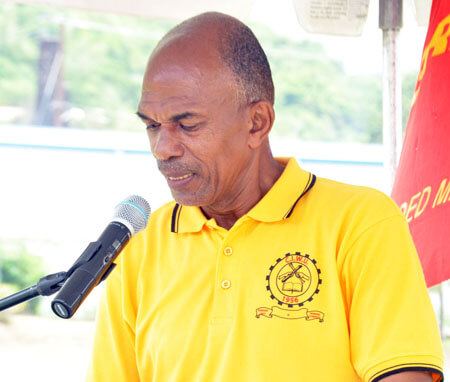 President of the Commercial & Industrial Workers Union (CIWU), George Mason has called on workers to turn out in large numbers to Labour Day celebrations tomorrow to send a strong message to the Keith Mitchell-led government in St. George that public sector employees will not be defeated in their 4% wage increase struggle.

Mason made the call on Saturday night as he addressed about 60 persons, mainly teachers who assembled in St. David as a show of support for President of the Grenada Union of Teachers (GUT), Jude Bartholomew who was being questioned at the St. David’s Police Station in connection with protest marches against government’s refusal to pay the money that was due at the end of January.

According to the veteran trade union leader, the umbrella body, the Grenada Trade Union Council (GTUC) was not planning the usual elaborate May Day celebrations this year due to the coronavirus pandemic but the plan will now be changed in light of new developments on the labour front.

Mason said that the move by the lawmen against Bartholomew will now serve as the impetus for the trade unions to call out more of their members to come out on Saturday as a show of unity and strength in the labour movement.

“I am asking you to come out for May Day. If you thought May Day was dead this year we will be on fire. If we remain silent things will get worse,” he told a gathering of about 60 persons, most of them teachers.

Mason urged the workers to stand up and fight with their leader on the 4% issue because if they fail to do so they will lose all the gains and that the victory can only be won by uniting together and not being divided.

“We will only win through unity. We are going to be like ants on their backs,” he said.

THE NEW TODAY understands that the TUC is planning to march from Tempe into the national stadium at Queen’s Park where labour leaders will then deliver their traditional May Day messages which are expected to focus on the 4% battle against the ruling New National Party (NNP) regime.

One of the organisers said that the intention is to get each union to send a contingent of 20 persons each to take part in the march but it is now obvious that more workers will be turning up on Labour Day.

According to Mason, the Mitchell-led administration is trying its best to intimidate Bartholomew as he is one of the newest leaders in the trade union movement.

In an interview with THE NEW TODAY on Saturday night, Mason said that the move by the police against Bartholomew is being done in an effort to try and intimidate the new GUT boss by “trying to pull him in and showing that they are in charge”.

“He is new, he is young, he is fresh and what I think they are trying to do is to give him a baptism of fire,” he said.

“We are here today to give him and the union full support and solidarity. This is just sheer intimidation and fear from this government and we will not bow, we will not surrender,” he added.

According to Mason, he is absolutely sure that the Mitchell-led regime is behind the attempted crackdown by the lawmen on the young GUT President.

He said: “The government is behind it of course – the police cannot operate as solo – they are employed by the government, they are basically carrying out government’s instructions which is the government’s line of putting you in check – in other words don’t go out of line because we are there, we are watching you and if you only miss, you slide.

“So that is what is happening tonight. We are defiant, we will continue – if they touch one they touch all and am here tonight to demonstrate my solidarity with the President-General of the GUT and the Labour Movement.

Mason along with two other union leaders, Senator Andre Lewis of the Technical & Allied Workers Union (TAWU) and Brian Grimes of the Public Workers Union (PWU) joined the gathering outside the St. David’s Police Station as a show of support for Bartholomew.

Grimes said that he was mandated by his newly elected executive to journey to the police station to demonstrate their support for the GUT boss.

Like Mason, he said the action taken against Bartholomew was clearly intended to intimidate him in the 4% struggle against the Mitchell-led regime.