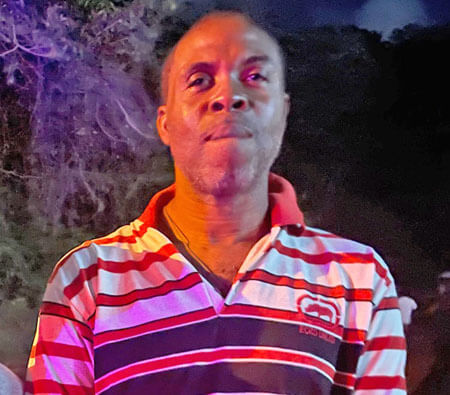 It is now emerging that the police crackdown over the weekend on the President of the Grenada Union of Teachers (GUT), Jude Bartholomew was linked to the protest action taken outside the million dollar private property owned by Prime Minister Dr. Keith Mitchell in Diamond, St. Mark.

Twenty-four hours after teachers in Grenada staged the protest action outside the residence of the Prime Minister, a party of officers from the Criminal Investigation Department (CID) of the Royal Grenada Police Force (RGPF) swooped down on the home of Bartholomew at Pomme Rose, St. David.

The TUC boss was asked by the detectives around 3.00 p.m. Saturday to accompany them to their head office in the city and when he disagreed a compromise was reached to turn himself in at the St David police station to be questioned about trade union protest activities.

The GUT has been going around the country holding vigils to pressure the government to pay a 4% pay increase that is past due.

Speaking to a gathering after he was released from detention, Bartholomew said he was first questioned about whether permission had been granted by the police for the staging of an April 7 protest march in the city by teachers.

However, this is being viewed as a smokescreen since the police would already be aware of whether or not permission had been received from police Headquarters at Fort George.

According to Bartholomew, the CID officers soon switched the line of questioning to the GUT protest in St. Mark where PM Mitchell often spends time in his private residence.

Protesters had gathered outside the country home of Dr. Mitchell chanting and demanding that the increase be paid.

They also went to the home of Parliamentary Representative for St Mark, Dr. Clarice Modeste-Curwen.

“We were lucky enough to meet her coming out of her mansion and we gave her some tunes,” a GUT member said.

Dr. Modeste-Curwen reportedly greeted the teachers and promised to convey their “message” to the Prime Minister, whose own country estate is located close to the home of the MP.

THE NEW TODAY cannot independently confirm whether the Grenadian leader had filed a complaint with the police on the activities of the GUT outside his home.

President of the umbrella Grenada Trade Union Council (GTUC), Andre Lewis addressed the gathering following the release of the GUT leader from detention.

He spoke of a strengthening of the resolve of workers to fight for the increase, which is also owed to public officers.

Lewis said the action of the police in detaining a Union leader also raises questions about who is advising the Prime Minister on industrial matters.

One member of the GUT expressed fears that the Prime Minister who is also Minister for National Security with direct responsibility for the police force may continue to use the police to try and intimidate teachers and that there may be stronger actions taken against protestors in the future.