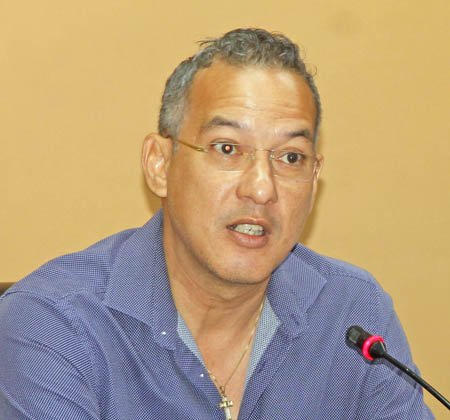 “We have to consider or believe that it (COVID-19) is here and we haven’t found it (yet) and act as such…it is in our best interest as a nation to assume that it is here (and) not a failure of the system…no health care system has been perfect with this and we have to assume that we are no different here.”

Those were the words uttered by Health Minister Nicholas Steele at Tuesday’s weekly post-Cabinet press briefing as government continues its battle against the deadly coronavirus that is sweeping across the world and affecting some Caribbean islands.

According to Minister Steele, while “we have been proactive, we have to assume the worst case (scenario)…”.

“I am not going to pretend that I think we have done an amazing job and we have been different from anywhere else in the world and that is why we have to keep speaking about the Social Distancing and the various protocols to follow (and) if you follow them then you stand a very good chance of not getting COVID-19…you will not get it if you follow all these protocols,” he said.

Minister Steele announced that Grenadian nationals and residents returning to the island and especially from countries affected by the virus “will be quarantined for a period of 14 days upon arrival into Grenada” effective as of Wednesday, March 18 at 23:59 p.m.

“If you are not a Grenadian national or resident and in the last 14 days you have been to Iran, South Korea, China or anywhere in Europe including the United Kingdom and Ireland, you will be refused entry into the country, he said, adding that “upon arrival from any other destination, you will be screened and asked to self-quarantine for 14 days.”

Additionally, he issued a reminder to persons that “before disembarking (an aircraft), each passenger is required to complete a declaration form on your health status and is also required to check in daily with the Ministry of Health, regardless of your point of origin.”

“Additional methods of quarantine or isolation may become necessary if any one becomes symptomatic,” he said.

The senior government minister admonished persons who are self-quarantined that they are to “avoid all contact” with family members and friends.

“Maintain social distancing, so that means for those of us who have loved ones who have recently traveled and returning, no hugging and kissing. We have to understand that under these circumstances that … we have to take the necessary precautions,” he said.

The Health Minister also confirmed that at the time of Tuesday’s press briefing a total of 18 persons have been tested for the virus on the island.

Out of the 18 persons tested, eight (8) were associated with the individual who was identified as being exposed to the coronavirus female from the United Kingdom, who spent seven (7) days on the island (and stayed at the Radisson Hotel in Grand Anse) but became the first confirmed case in St. Lucia last week Friday.

“…We are expecting those results today,” the minister said, while pointing out that the number of persons being tested is “increasing day by day.”

According to Minister Steele, the Grenadian authorities are focusing more on the St Lucia case than the one from Trinidad since the individual from the twin island republic only spent one night on island.”

This is so, he said because the person who fell ill in St Lucia “was symptomatic here and made a conscious decision not to inform any medical personnel.”

“Some of the individuals of the St. Lucia case are exhibiting symptoms of a sort,” he said, adding that this is why “we have to test them (locals who came in contact) to know for sure.

“…As you know this is flu season as well (and) they are in quarantine and we have to test to make sure that it is COVID-19 or something else so the response and effort is a lot more concentrated on the (hotel) case (where the St Lucian stayed),” he added.

Pointing to the high demand for medical supplies such as testing kits, protective masks and the shortage being reported internationally, the Grenada Minister disclosed that over “600 test kits” have been ordered and that is “separate from what was already in transit”.

He sought to assure Grenadians that “all efforts are being made” to ensure that “the bits of equipment that we have ordered gets out of the US and the UK and whatever sources they are coming from before those very countries say we want to keep everything that we have”.

“And that is also one of the reasons why in our opinion, having thought this through, a practical approach to try and make sure that those airlines run as long as possible because they are not just going to be bringing just people (but) assistance as well,” he remarked.

According to COVID-19 National Coordinator, Dr. George Mitchell, there are approximately 17 test kits remaining on the island pending the arrival of the next shipment.

China has announced a shipment of medical supplies to help Grenada fight the Covid-19 virus is being transported to the island.