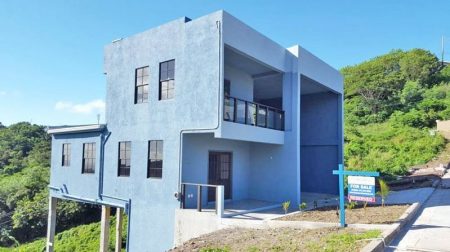 Acting Police Commissioner, Edvin Martin has been left totally embarrassed over two incidents within a matter of days of each other in which police officers in key positions failed to perform on the job involving alleged criminal activities.

One incident involves building contractor Orville Roberts who was on the police most wanted list and was needed for questioning on allegations of committing several acts of fraud amounting to over one million E.C dollars in a massive housing construction scam.

The other incident involves Alstand Edwards of the sister isle of Carriacou but who lives at Windsor Forest who was forced to surrender his passport after being granted bail for a criminal offence and within short order was able to obtain another passport from the Immigration Department.

Edwards was only discovered when Security officers at MBIA called in police after he was caught with 2.2 kilos of cocaine in his possession while attempting to use the new passport to travel to England.

A police insider said that an investigation has already been launched to determine the circumstances in which the 33-year old man from the sister isle managed to obtain the passport including the possibility of bribery.

In Roberts case, he is based in Miami in the United States and is operating a local construction company known as Legendway International which collected thousands of dollars from persons to build houses and ran-off with the money.

A police official confirmed to THE NEW TODAY that Roberts was detained shortly after arriving on the island at the Maurice Bishop International Airport (MBIA) as part of an investigation being done by the Financial Intelligence Unit (FIU) following several reports that he had defrauded several persons of over $1 million in what is turning out to be a scam.

He said that the businessman was taken to South St. George Police Station at Morne Rouge but was released from custody about three days later, pending further investigations to be carried out including the gathering of certain documents from a local commercial bank.

However, Roberts was able to board a flight at MBIA on Saturday night for Trinidad where he then connected on a Caribbean Airlines plane that took him to Miami and out of the hands of local police.

A few hours before slipping through the airport, the building contractor was spotted at Woburn where he is known to live at times, on some of his visits to Grenada with his female companion.

The source said that Commissioner Martin has decided to launch an investigation into the disappearance of the head of Legendway and that the spotlight will fall on the FIU officer who is assigned to the airport.

He said the investigation would seek to determine whether the FIU had notified Immigration officers at MBIA to be on the look-out for Roberts and to prevent him from leaving the country.

This newspaper can confirm that it had sent two locals who came into its office in recent months, to file reports with the police about thousands of dollars given to Roberts to construct houses that were never built.

One of the complainants who lives in Brooklyn, New York had given Roberts US$70, 000.00 to build a house at a development project in Morne Jaloux, St. George’s.

Roberts refused to give back the money after not delivering the house.

However, the woman was refunded by a local credit union after she threatened to take legal action against them in the face of a contract between the contractor and the financial institution to build several houses at the housing development complex.

The other person to visit THE NEW TODAY to complain about Roberts was a young female who had given the housing contractor EC$100, 000.00 which was taken out as a loan from a local commercial bank to be used as a downpayment to build a house in the Calivigny/Westerhall area.

This newspaper referred the young woman to the Criminal Investigation Department (CID) to file a criminal complaint against Roberts.

According to police sources, the FIU was engaged in at least six active investigations involving Roberts over receiving substantial downpayments from locals to build houses and not delivering the houses at the agreed time.

One of the well-known cases involves a prominent medical doctor in Grenville, St. Andrew’s who was allegedly scammed by Roberts who failed to complete the building contract.

“I know of a couple whose house is still incomplete after three years.

He (Roberts) tried to get them to go to suppliers for materials after he collected their money and didn’t buy what he was supposed to. It was a bank this time that gave him the money, then the bank refused to give the couple the key to the house as it was not finished”, said one local familiar with the alleged scam ran by Roberts.

Roberts is originally from Gladstone Road Grenville and his father was a former school principal in the St. Andrew’s area.