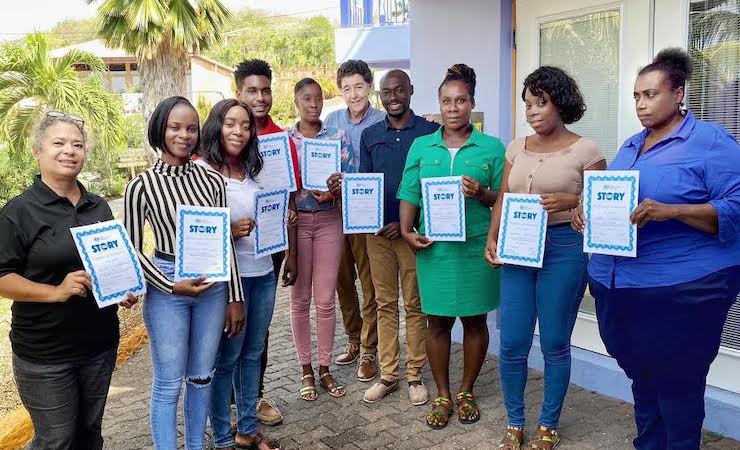 Workshop facilitator Dan Mason (centre), along with Deborah Cudjoe from the British High Commission Office in Grenada and workshop participants

Media workers in Grenada are among over 70 of their colleagues across six Caribbean islands to benefit from an intensive media workshop facilitated by international Media Trainer, Dan Mason from the United Kingdom.

The “Change your story” workshop is the brainchild of the British High Commission for Barbados and the Eastern Caribbean and was conducted during a day and a half at the True Blue Bay Resort ending on Saturday.

The session was geared at giving participants the opportunity to hone their craft and develop new skills by “looking at stories in a different kind of way that (would) make a positive benefit to local communities and about telling stories with new apps and tools, especially mobile apps and tools.”

“It’s also about creating a wider network of journalists who can collaborate together on projects in the future,” said Mason in an interview with THE NEW TODAY at the end of the workshop.

Mason, who has spent the last 12 years of his life training journalists and communication professionals in over 30 countries, described the initiative as “quite a big commitment by the British High Commission for Barbados and the Eastern Caribbean.”

“It has been a pleasure to support it…It’s been an amazing experience,” he said, further expressing a desire to have been able to stay longer in the individual countries working with the journalist.

“For me, if the journalist can go away just thinking a little bit differently about stories they face sometimes using one or two of the tools that we’ve covered during the workshop then it would have been a success.”

Each workshop participant was presented with a certificate of participation following the training session.

The workshop started in Barbados last week Monday and has already been conducted in the islands of St. Kitts, Antigua and Grenada, St. Vincent and ends this weekend in St. Lucia.

Mason said: “It’s a fairly busy schedule but it does give a unique opportunity to see the challenges and opportunities that journalists face in the different islands, in different circumstances – that part I found absolute fascinating.

“I’ve never heard of a project that took in so many countries in such a short space of time. That makes it, I think, very interesting, unique and very different,” he added.

During the workshop, participants were brought up to speed on how to use mobile apps, to take a good picture, photo editing, videography and podcasting among other areas.

According to Mason, throughout his years as a trainer he has observed that many of the challenges faced in the profession are similar across the various countries.

“Journalism has challenges everywhere. Those challenges can come because of business pressures, regime pressures. There are different kinds of pressures (and) that mean that generally speaking, journalists are working in smaller newsrooms, they are busier, they are having to take on more themselves and the thing that really frustrates me about that side of the development of journalism is where you have few journalists trying to do more and they end up having a much narrower focus (because) there is not the freedom to develop stories and look at stories in more depth and actually that’s what people need at this time, stories being told and explained in more depth. Every island here faces those challenges as many other countries do and that’s one of the challenges,” he said.

He added that while the challenges vary depending on local circumstances “the strength that you all have here in the Eastern Caribbean, the different countries (are) that you all still understand that you are the communities.”

Mason went on to say: “You are relatively small countries, you are communities and that’s both a great strength in that you know people, you can get things done, you the journalist here are held accountable, it also makes it difficult working in that environment when something doesn’t go right you are in a very exposed position and that’s the same in all of the Caribbean islands”.

THE NEW TODAY newspaper was represented at the workshop by female Journalist Nisha Paul.