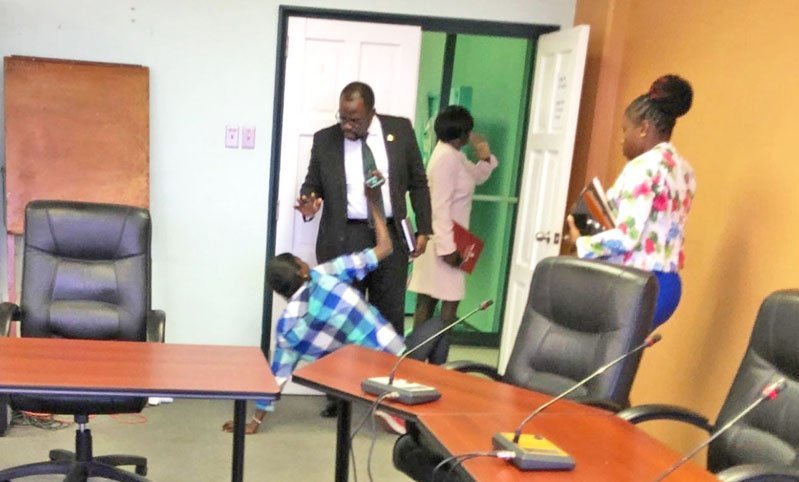 Workers representative in the Upper House of Parliament, Senator Andre Lewis has added his voice to the ongoing debate surrounding last week’s incident in which Freelance Journalist, Calistra Farrier was seen on the floor following an encounter with Minister of State for Information, Sen. Winston Garraway.

Sen. Lewis, the current President General of the Technical & Allied Workers Union (TAWU) has expressed disappointment that the media workers who were present in the conference room of the Ministry of Works, when the alleged incident occurred, did not see it fit to file a report for the public.

The incident occurred as Garraway, who is a Pastor and serves as Minister of State in the Office of the Prime Minister, attempted to block the female journalist from interviewing Tourism Minister, Dr. Clarice Modeste-Curwen on a chopping incident at a secondary school in her St. Mark constituency.

Farrier indicated that the female government minister had agreed prior to the post-Cabinet briefing to do the interview and was inclined to do so up until the intervention of Sen. Garraway.

Although a photo of the Farrier/Garraway encounter went viral on social media, only two (2) local newspapers have reported about the incident while the electronic media stayed away from the incident.

Speaking to reporters at TAWU House on Green Street in St. George’s last week Friday Sen. Lewis pointed out that although the “information appears to be sketchy” about the incident, it is understood that some members of the media were present and had a duty “to report” what actually happened.

“…If Calistra Farrier‘s side of the story is not correct (then) you (the media) have a responsibility to say it’s not correct. The media houses that were present have a responsibility to clarify it and not only because it may or may not have been correct what she (Calistra) is saying but if an incident like this took place, even if it was not to the gravity that is being said on social media, the fact that the media was present…the media has a responsibility to at least have a news item even if to say that an incident took place following the post-Cabinet briefing and we will keep you in tune as to some further story,” he said.

The President of the Media Workers Association of Grenada (MWAG), Shere-Ann Noel who is a government employee was in the room and reportedly witnessed the Garraway/Farrier incident.

The TAWU President General dropped hints that the bosses at the media houses that were silent on the issue might have killed the story, saying, “the management of these media houses must be held responsible”.

“So, let’s put the blame where it is,” Lewis said, adding that “it is these kinds of things that would play into the hands of those who believe or those who perceive that the ruling administration is in charge or control the media houses”.

“I am not saying that’s what it is but it is those sort of things that lend reasoning to those perceptions. So, the media houses, the owners, managers and News Directors have a responsibility to report the news. I am not telling you what to say but at least report the news.

According to Sen. Lewis, the incident after the post-Cabinet press briefing is “a major issue” since it involved a government minister and a journalist.

“…We (TAWU) are not here taking sides. I do not know what happened but what we all seem to know is that an incident took place because there is a photo on social media (and) if that photo is not an accurate photo and if the individuals in the photo were not there, there would have been some distancing themselves already,” he remarked.

As a member in the Senate representing workers and also having within our ranks at the Technical & Allied Workers Union (TAWU) members who are employed in the media, we have seen some worrying developments (and) there is cause for concern

“As a member in the Senate representing workers and also having within our ranks at the Technical & Allied Workers Union (TAWU) members who are employed in the media, we have seen some worrying developments (and) there is cause for concern…”, he said.

Sen. Lewis told reporters: “Whatever buttons were pushed or not pushed – these are worrying signs and therefore it is incumbent upon all of us to ensure that these things do not escalate out of control and those of us who are in leadership positions, especially when we are exposed to the public and the media who would ask us questions or make comments, we have to find a way to respond in such a manner that does not result in anything that becomes violent or physical.”

The TAWU boss stated that the union has been observing “what appears to be a certain level of arrogance and highhandedness (towards the media) and our mind goes back to the scolding (on respect and professionalism) that the media was given as to how you should conduct yourselves during post-Cabinet briefings.

This was a clear reference to the scolding given to the local media by journalist Philomena Roberston, the current Press Secretary in the Office of the Prime Minister.

Lewis described the action by Robertson as “totally, totally out of place.”

“You have demonstrated a level of professionalism over the many years and that’s your responsibility and duty, and as a matter of fact the media ought to be more of an investigative nature – should have more people doing investigative journalism,” he said.

Sen. Lewis acknowledged that while “we have to be professional (and) respectful, asking hard questions certainly cannot be attributed (to) that of being disrespectful.”

He encouraged the local media to “continue (asking hard questions) because the people of Grenada, all of us we have responsibilities and we are dependent upon the media to bring to our attention matters that even if you are not sure of, but it can lead to us finding out more about.”