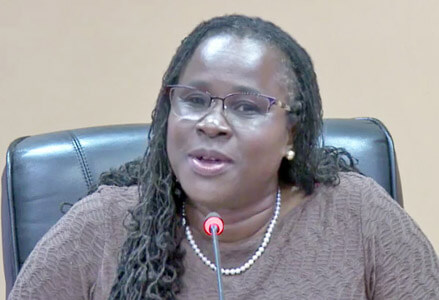 Attorney General and Minister for Legal Affairs and Labour, Claudette Joseph - documents housed at the vault at the Supreme Court Registry will be relocated to a more suitable and conducive location

Attorney General and Minister for Legal Affairs, Senator Claudette Joseph, has confirmed the disappearance of a computer at the Supreme Court Registry, which has resulted in the early release of convicted British murderer, Robert Alexander-Clack, who was serving a 67-year prison sentence in connection with the death of his Grenadian wife.

The Court of Appeal, at a sitting last week, ordered the release of Clack after it became clear that the matter could not proceed due to the unavailability of court transcripts.

“From all indications, the computer on which the recording would have been typed…cannot be found at this time, and that will contain the critical parts of the proceedings…,” Sen. Joseph told reporters during Tuesday’s post-Cabinet press briefing in St. George’s.

The confirmation of the missing computer came exactly one week after the convicted murderer’s release from custody last week Tuesday, after serving only 12 prison years of the sentence handed down to him by a High Court judge in February 2016, for Non-Capital Murder in connection with the June 2014 death of his then 27-year-old wife, Nixiann Downes-Clack of Duquense, St. Mark.

The nation went into shock as the body was recovered inside a suitcase that was buried in a shallow grave in the village of Mt. Moritz in St. George North-West.

The gruesome killing reportedly occurred on the family’s fourth anniversary after the deceased wife found out that her husband was having an affair with the teenage babysitter, who was a key witness for the state.

Attorney Anselm Clouden, who had filed the appeal on behalf of Clack against the lengthy sentence in 2016, has alluded to “a complete breakdown in the judiciary over the last 10 years,” noting that his client had been waiting for his appeal to be processed for the last six (6) years.

“…As a consequence, it (the breakdown in the judiciary) seriously impacts and infringes an accused person’s right to a fair trial and a hearing…and, the state cannot be derelict, and negligent, and reckless such as they are…” Attorney Clouden told reporters in an interview on Monday.

Sen. Joseph publicly empathised with the family of the deceased mother on Tuesday in light of the challenges within the legal system that has led to the killer’s early release from prison, which is triggering widespread debate in the country.

She said that the next course of action lies with the Office of the Director of Public Prosecution (DPP) which will determine whether “there are sufficient grounds on which this matter may be appealed to the Privy Council” in England, which is Grenada’s final Court of Appeal.

Minister Joseph revealed that there may be other cases affected by the unavailability of transcripts that were stored on the missing computer but it is still clear whether a criminal investigation was launched.

She gave assurances that the newly installed government has already begun taking steps to “secure the very fragile information, and documents housed at the vault at the Supreme Court Registry” and they will be “relocated to a more suitable and conducive location.”

“We (the Ministry of Legal Affairs) have been mandated to secure better equipment, and we will be looking for the best available on the market, and also to train staff who can be equipped to produce and certify the transcript in the shortest possible time,” she said.

“Cabinet has given full support to the (Supreme Court) Registrar, and me, to work to properly staff that unit and to take care of the backlog that we now have in the preparation of transcripts (and) we are going to be working feverishly at this so that when next the Court of Appeals sit in Grenada, all of the matters will have the transcripts prepared,” she added.

Minister Joseph told reporters that special attention will be given to the Court Reporting Unit of the Supreme Court Registry, which will be relocated, along with the Mediation Centre to the ground floor or the Clico building on Young Street which currently houses four (4) Supreme Courts on the upper floors – the St. George’s High Court No. 1, 2, 3 and 4.

Since assuming office three months ago, Sen. Joseph said the government has also taken steps to “beef up security, (and) strengthen the human resource capacity of the legal system” with plans to reopen the Law Library, will also be relocated, as well as to secure and improve the judicial system.

“We have hired some new staff, and we are in the process of filling some vacancies that still exist in the judicial system, and as part of the broader government policy, we are putting systems in place to ensure that those unestablished, temporary, and longstanding contract workers in the legal system are regularised,” she remarked.