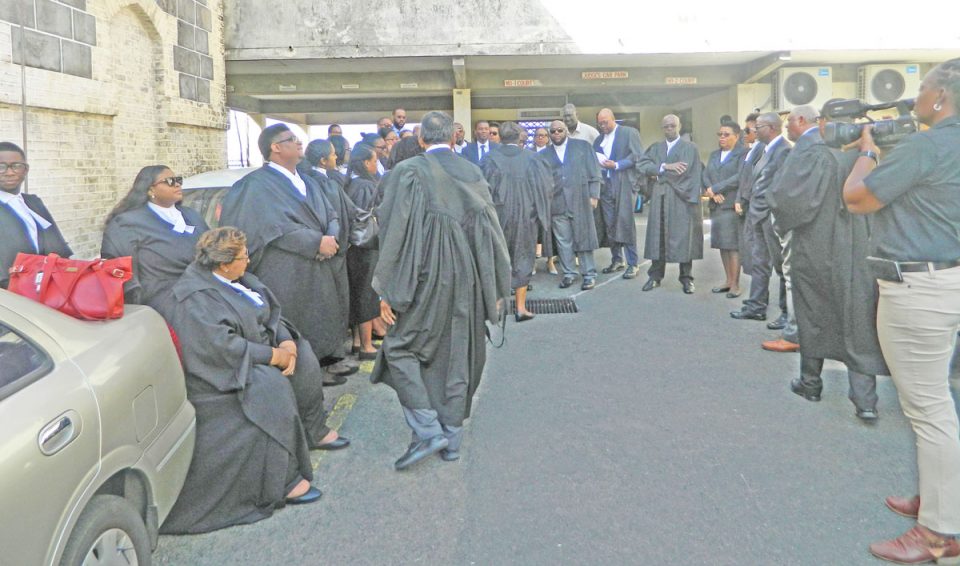 We are compelled as members of the Bar to demand of the government and all relevant authority that something in the nature of an urgent plan must be constructed and that plan must comprehensively address every aspect of our judicial system which we consider lies in tatters”.

Those were the words uttered Monday by President of the Grenada Bar Association (GBA), Lisa Taylor as several gathered in the Car Park of the Supreme Court Registry on Church Street to stage a silent and peaceful protest against the deteriorating state of the legal system.

The move comes on the heels of a testing time for the Keith Mitchell-led New National Party (NNP) government which is already engaged in a protracted battle with three public sector unions and staff associations representing public sector employees on a dispute over pension and gratuity payments.

A representative from each law firm on the island heeded the call by the female GBA President to turn out in order to highlight the growing concerns of dissatisfaction experienced on a daily basis by persons within the legal profession.

These range from the non-existence of a settled place to practice the profession, to lack of transcripts and the deplorable conditions of the Supreme Court Registry.

According to Attorney Taylor this action is being taken by the Bar to voice the disappointment of members in government for not adhering to the ultimatum given by the lawyers to provide an adequate court facility for practice by December 31.

“We are aware that since May 2018, all criminal and civil court cases came to a complete halt in Grenada because the LIME building which previously housed them could no longer accommodate us, because it posed a danger to the health and security of lawyers, judges and the public”, she said.

Taylor went on: “A period of months elapsed and no solution was found until October, when one criminal court was commissioned and we began to conduct civil matters at the Parliament Building on a temporary basis – subject as I have said to the Parliamentary Schedule.

“…We fast forward to December 31st, 2018…the deadline came and as we expected, but we allowed in good faith for things to be done in good order and in good time, nothing materially was done to change our situation”, she said.

Taylor told local reporters covering the event that since 2001, the Bar has been calling out to government on issues affecting the timely dispensation of justice but nothing is there to show that the calls were heard.

“We stand here together united as one Grenada Bar Association to say to the Government of Grenada enough is enough. It cannot stand that in 2019, 15 years on from the destruction of the courts that we are still awaiting a permanent solution – something more than what has been done, has to be done.

“…It cannot stand that since 2001, we have been calling upon the authorities and consistently so – every successive governments has blame to carry in this matter – we have been calling on the authorities to arrest the decay of the registry and in 2019 we are not satisfied that anything of the nature that we have called upon the government to do has in fact even been attempted.

Several of the island’s court buildings were either destroyed or badly damaged by the passage of Hurricane Ivan in 2004.

Taylor also raised concerns over the lack of transcripts from high court matters which has resulted in persons walking free because their transcripts were not submitted to the Court of Appeal.

“We call upon the government, consistent with its premise to apply the necessary funds to start the court transcriptionist office, which is now carried on the shoulder of one qualified court transcriptionist. It is critical that the backlog of transcripts which goes back as far as 2013 must be of necessity and an emergency basis be addressed…”, she said.

“…What that means is what you have seen is that the Court of Appeal, when it sits, must call upon the government from time to time, to allow for people who have just causes awaiting them at the Appeal’s Court and cannot be advanced because there are no transcripts. Recently, we had the specter where people had to be let out because their transcripts were not available for them to have their appeal prosecuted”, she added.

The GBA boss advanced the position that all of these elements when put together “constitutes for us at the Grenada Bar, a crisis.”

This problem, she said “cannot be addressed by accommodating us in a court, that is one important element but we asked now for a comprehensive treatment of the break-down of our judicial system, nothing less can suffice.”

She suggested that priority must be given to the concerns being expressed by lawyers and to allow for financial allocations to become a reality as the bar will continue to champion the cause.

“This is by no means a one-off, we are not going to go back into our offices and turn on the air-conditioning unit and be comfortable. It cannot be, it cannot stand, we are where we are…so we are going to consider every possible legal option available to us to cause this problem to be addressed and address today. The time has now come for the Government of Grenada to reckon with the fact that as I’ve said the judicial arm lies on the ground. That’s figuratively what it is and it must be lifted up,” she said.

“I think the underlying problem with governments in the region is that the judiciary gets no priority…in other words, it’s always in response to a crisis, a band aid put on a sore as opposed to dealing with the fundamental underlying issues”, he said.

“As we stand here in the background, we can see York House. This is a relic since 2004, 14 years now and the courts have not gotten a permanent home,” he added.
Prior to the destruction of York House by Hurricane Ivan, the bottom floor was used as the island’s High Court No.1.

According to Ferguson, the local bar is getting solidarity on this issue from other bars throughout the region from Bahamas in the north to Trinidad in the south.

“…I must add Guyana in the deeper south and Belize have expressed solidarity and for 2019, you would certainly see renewed efforts on behalf of Bars throughout the region to demand that governments give higher priority…the high priority to which the arm of the government, as one of the three arms of the state, the judiciary and that arm has always historically suffered.

“Right now as we speak, there are constituent Bars throughout the region, including St. Lucia including Dominica…folks in Belize have taken steps actively supported by OCCBA to get their respective governments to give priority to the judiciary.

Former Attorney General, Jimmy Bristol also chimed in to the cause asking that government disclose what amount of money is owed to the Eastern Caribbean Supreme Court to get a better understanding of its financial standing.

Bristol said: “I would like the government to disclose how much money the Grenada Government owes to the Eastern Caribbean Supreme Court by way of its subvention. The last figure, the total for the OECS debt to the court was $22 million. I want to know what part of that belongs to us, so we can properly ascertain what the truth is behind their funding.

“…I am aware from an official letter received from the Registrar of the Supreme Court some time ago that the government said they are not providing any increase staffing to meet the acute issues of transcripts and general administration because it is a mess and they’re not doing it because they’re on the home-grown programme…so they’re not giving it a priority…”.