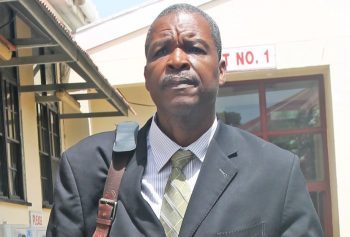 Jerry Edwin – an advocate for the rights of black people

U.S trained Grenadian lawyer Jerry Edwin has announced that he plans to lead local lawyers in protest action outside the American Embassy at Lance Aux Epines tomorrow in solidarity “with sisters and brothers fighting U.S racism”.

Edwin said that he would be inviting some of the local lawyers who are known to support activism to join him in sending a message to the powers-that-be in Washington that the Caribbean is in full support of their “brothers and sisters” in North America.

The criminal defence lawyer told THE NEW TODAY that before returning to his homeland that he had suffered personally at the hands of white extremists.

“I was often wrongly arrested, teargassed and like so many countless black men and women suffered this fate simply because of the colour of my skin,” he said.

According to Edwin, it is time for members of the legal profession throughout the English-speaking Caribbean to join forces and express their feelings on the unfolding situation in the United States.

“I am asking the bars and law fraternities across the Caribbean to send notes/letters/memoranda of solidarity with our family in the United States,” he said.

Edwin noted that in the past, Caribbean black people often “stood together as West Indians linked through a line of historical alliances with our African American Brothers and sisters because American racism never asked for our passport or green card”.

“Racial violence has been immune to national origin. It has shown itself deadly vicious to all people of colour. Same for our people in Canada and the United Kingdom” he remarked.

“It is not a new narrative. But the combustion of the Covid-19 pandemic and the knee on the neck of (George) Floyd has been the perfect storm,” he said.

The unrest in the U.S was sparked off by the killing of Floyd in police custody on the street of Minneapolis on May 25.

Video footages showed the unarmed black man pinned to the floor, with a white police officer kneeling on his neck for almost nine minutes.

Floyd’s funeral is scheduled for Tuesday in Houston, his home city before he moved to Minneapolis.

The unrest in the United States has largely been replaced by several peaceful worldwide protests against racism and police brutality under the banner of “Black Lives Matter”.

Edwin who is promoting the protest action tomorrow outside the U.S embassy is licensed to practice law in the State of New York.

He is also a former member of the African National Congress International Bureau and was a member of the Nelson Mandela Welcome Committee appointed by former New York City Mayor, David Dinkins.