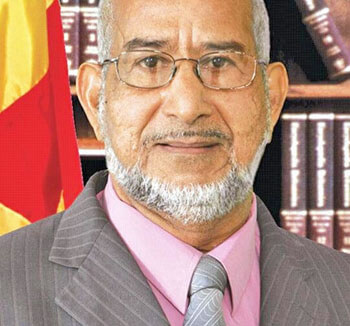 Businessman Kenny Lalsingh – is a former elected Member of Parliament

The Keith Mitchell-led government announced a few days ago that the Chinese built and funded mini hospital will be used as a site for the testing and vaccinations of persons in St. John, St Mark and St Patrick in relation to the deadly virus which has infected over 5, 000 persons in Grenada.

A number of persons have been calling on the ruling New National Party (NNP) to use the unoccupied brand new building which has been lying idle despite the hike in Covid-19 cases on the island.

Speaking to THE NEW TODAY, Lalsingh said that the massive increase in cases of the disease has taught the island that infected persons cannot be allowed to go back home and live with those who have not been infected by the deadly virus and help to spread it but should be put in Isolation centres.

“You have to create quarantine buildings throughout the country,” he said as he pointed in the direction of the facility at Gouyave.

According to Lalsingh the newly built headquarters for the National Disaster Management Agency (NaDMA at Morne Jaloux in St. George and other buildings should be earmarked for quarantine purposes in times of disaster.

He said that once an individual is found with the coronavirus virus then he should be immediately quarantined “and when you get well you come back out.”

“I think that is one of the things that we need to prepare for,” he added.

The former Member of Parliament for St Patrick also suggested that the Keith Mitchell-led NNP government should look to other persons as messengers rather than politicians to help deliver the Covid-19 messages to the population.

“You need to use other people to spread the message – people who are neutral. Somehow when the politicians are spreading the message, people reject it for political reasons – and I think that they should avoid and use public servants, neutral people in the society to create the message for the people,” he said.

Lalsingh also said he was hopeful that the country should have learnt lessons from the current Covid-19 crisis to be better prepared for a possible third wave of the virus.

He suggested that hygiene should be brought back into the school system as a curriculum subject for the children in order to help prepare them to deal with an outbreak of a disease.

The businessman said: “When I was a boy in primary school they kept telling you about Hygiene – wash your hands before you eat, after you eat. I think we have stopped all these things in school – I think that we need to bring them back. We can’t want to practice good Hygiene only when there’s a problem. Good Hygiene must be a continuous process of educating people for a healthy life”.

Lalsingh also expressed support for the initiative taken by the authorities in recent times to encourage Grenadians to eat more local food and fruits in order to remain healthy.

He acknowledged that locals have gotten “carried away with the nice packages, snacks and so forth” of foreign imported food items which dominate the shelves of local supermarkets.

“Yes, you can have some but I think they need to promote the eating of healthy food – we have all that it takes in Grenada for someone to build their immune system.

“So that process must be continued every day in the schools, in the village, all around and not just prepare us for any wave that might come around but prepare people for life and we should never move away from it.

“There are some things that we have moved away from and if we bring them back we can prepare our young people for life. That is what is important.