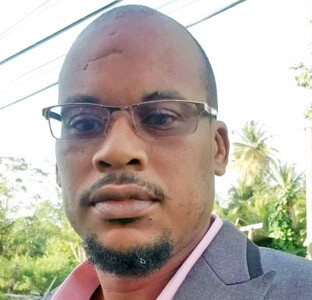 President of the Public Workers Union (GPWU) Brian Grimes has expressed strong opposition to Labour Minister Claudette Joseph’s handling of the post-election issue surrounding the termination of employment of four (4) longstanding low-income earners on the sister isle of Carriacou, along with one geriatric worker, who has been transferred from her longstanding post to work on the Limlair Livestock Farm.

Grimes had earlier accused the newly installed Minister for Carriacou and Petite Martinique Affairs Tevin Andrews, and his Permanent Secretary Javan Williams of “victimisation” and committing a “terrorist act,” against workers, who are all women, when he raised the issue at a press conference in St. George’s last week Thursday.

The union leader has now placed on record his “deep concern” with the position of the Labour Minister, who is also Minister of Legal Affairs, and Attorney General (AG) on the contentious issue in an interview with THE NEW TODAY on Tuesday.

“I witnessed the Attorney General, and Minister of Labour on a political programme, the NDC Heartbeat (programme) basically giving judgment to the general population that the unfortunate acts committed against our members were legally, and even morally correct,” he said.

“I am amazed by this (and) I think it is a significant breach of protocol seeing that it was stated that she had to investigate the matter,” added Grimes who said that was her response when the issue was raised with her at a meeting with the Trade Union Council last week Friday.

Appearing on the weekly NDC Heartbeat radio show on Sunday, the female government minister revealed that from her investigations, nothing improper was done to the workers.

“From my investigations of the matters, there was nothing wrong, and certainly nothing that rose to the level of victimisation, and definitely no terrorist act, as I understand it was described by one of the union officials,” she said.

“In fact, to speak of a person, especially a senior public officer in such a manner might well amount to defamation. So, as Attorney General, I am satisfied based on all the information provided that there was nothing wrong morally or legally in the steps taken but that in fact those steps were taken in furtherance of the transformational agenda of this government because in one particular case the person was actively campaigning against the transformation agenda,” she added.

Minister Joseph also defended the actions taken against the workers, noting that the four (4) who were terminated were on contracts, and that there was a “clause that says either party may terminate the contract on giving the other one month’s notice.”

“…There would have been a background basis for doing so (terminating the contracts) ranging from non-performance of their duties under the contract and in one case leaving the government employment during the course of the work day to go and do other work,” she remarked.

However, Grimes told THE NEW TODAY that “this matter is not over with as far as the union is concerned” and pointed to the union plan to go through the dispute resolution process towards finding an amicable solution to the matter.

“Obviously, we (would) have to go through the dispute resolution process, and potentially, we may reach before the Minister of Labour in mediation. So, there is a serious compromise here if the said Minister of Labour has established a position, brought it public, and demonstrated that there is extreme bias in terms of bringing a mutually beneficial result to this or just bringing justice to this situation,” he contended.

Additionally, the PWU boss said that he was “extremely appalled to see the Attorney General of Grenada, Carriacou, and Petite Martinique, taking exception to my description of taking bread out of the mouths of low-income women in the sister isles.”

“I described it as a terrorist act, and an attorney general, a lawyer by any stretch, would understand the power of description, the use of language when I say it was a terrorist act…in my view taking someone’s income away in these hard times when they have to pay bills, their families and themselves to take care of, and do all these things that working class people do, is a form of social and economic terrorism,” he said.

“To say this is a form of defamation, is sad, and it’s misleading and I think the person who sits at the helm of the Ministry of Labour, and sits as the Attorney General is not giving the impression that they want a mutually beneficial solution to this very matter but they are looking for confrontation,” he added.

Grimes went on to say: “And, this is what shocks me even more, someone who holds the post of Attorney General is supposed to be aufait, and very intimate, and familiar with the laws of Grenada, Carriacou and Petite Martinique. These workers worked from a range of nine (9) to 17 years in the public service. How can you then classify any of these workers as temporary even though the original letter stated that their terms of engagement were temporary?

“The fact that they stayed on and continued to work for this extremely significant period, based on Section 29 (5) of the Employment Act, they have now become permanent,” he argued.

Grimes also asserted that “if you (the employer) have to take discipline against someone based on Section 73 (3) of the Employment Act, there is a process to discipline an officer” ranging from “a verbal warning, a written warning if necessary, suspension, then demotion, and then dismissal.

He maintained that “there was no natural justice because none of the workers has any matter on their files related to the charges laid against them…they just received a letter with quotations from the SRO 27 (Public Service rules and regulations) and the Staff Orders, and they knew nothing of the charges…and they were just summarily put out of an income.”

“In a democratic country, you cannot terminate someone’s income based on hearsay without a natural dispute process or natural justice ensuing, giving the person an opportunity to defend themselves. Our court system speaks to that and our Labour Relations system also speaks to that. So, in the end, the authority failed to give the workers an opportunity to defend themselves so by that very fact the terminations were illegal.

Grimes also took issue with the actions taken against the workers who were terminated in the context of the new government’s transformational agenda, as explained by Minister Joseph, stating that it reminds him of the period “where our Constitution was suspended, and the rule of fear, guns and ammunition was the order of the day whereby 1979 to 1983, the People’s Revolutionary Government took over and if you were deemed to be a counter-revolutionary you were disenfranchised or possibly jailed.”

“So, what she (Minister Joseph) is saying to me, the rest of the population, and to the workforce in the public service (is that) if you are deemed to be someone who did not vote for the National Democratic Congress, your right to earn, work and your right to work as stated under Section 1 (D) of the Constitution of Grenada will be negated and this my friends is a very frightening prospect for our democracy,” he said.

Grimes also used the opportunity to point out the irony in Minister Joseph’s attempt to assure workers of the new government’s commitment to its campaign promises to regularise all temporary and contract workers.

“The irony in that statement is so strong and so overwhelming, it leaves one paralysed by just her stating that this is the intention while endorsing the victimisation against those workers on contract. These acts committed in the sister isles of Carriacou, and Petite Martinique in my view, make the campaign promises and the whole aura of empowering public officers coming from their campaign messaging a fallacy because within the first month you are not hearing about regularisation, what you are hearing about is victimisation.

“So, it is a total antithesis of what was spoken about before June 23, and I think the Prime Minister of the country should be very concerned about what is happening on the sister isles.

“…I believe that the transformational agenda should happen and that it is possible…but I think there are some actors here that may have gone on the wrong foot, and have damaged the image of this incoming administration and have hurt Grenadian citizens by the act they have committed.”

Grimes disclosed that the union has since reached out to the Ministry of Carriacou and Petite Martinique Affairs with the hope of resolving the matter for the affected workers – four of them who are “definite members” of PWU, while the fifth individual “pays agency fee.”

He did not identify who was collecting this fee.