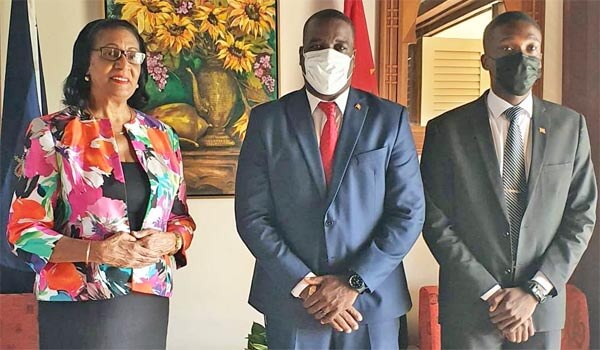 Dame Cecile is on the left and in the middle is former Infrastructure Development Minister, Norland Cox and on the right is Neilon Franklyn who will soon become one of the newly appointed NNP Senators in the Upper House of Parliament

There has been no official comment from the main opposition New National Party (NNP) on the last minute decision by former Minister of Legal Affairs, Kindra Maturine-Stewart to pull-out from representing the party in the Upper House of Parliament.

The surprise announcement from Maturine-Stewart came less than 24-hours before she was due to present her letters along with two others to Governor General Dame Cecile La Grenade to sit as a member of the Senate.

A party insider told THE NEW TODAY that he was shocked when information started to circulate last night that the former Member of Parliament for Carriacou & Petite Martinique who lost her seat in the June 23 general election, decided to pull out at the last minute.

A brief statement was circulated on Social Media from the ex-government minister which reads as follows: “I was indeed honoured to have been advised by the Leader of the Opposition and former Prime Minister of Grenada, Hon. Keith Mitchell that I was recommended as one of the three Opposition Senators to be a member of the Upper House of Parliament of Grenada.

However, after extensive consultation with my family and having regards to the demands of my family law practice to which I have since returned and the demands that come with the office as an Opposition Senator, regrettably I have advised the Leader of the Opposition to withdraw my name as a member of the Upper House.

As a member of the New National Party, I remain committed to supporting the work of the party especially as it relates to its rebuilding and consolidation.”

The two other NNP Senators – former Minister of Infrastructure Development, Norland Cox, and Youth Ambassador and Ex-Customs Department employee, Neilon Franklyn – visited Dame Cecile this morning to present their letters to pave the way for their official entry into Parliament at its re-opening after the elections.

New Prime Minister Dickon Mitchell has signaled his intention to call the first sitting of Parliament sometime in August.

According to an NNP insider, the decision of Maturine-Stewart to withdraw from accepting a Senatorial appointment on behalf of the party has now cleared the way for Cox to be installed as its Caretaker Candidate for the Constituency of Carriacou and Petite Martinique for the next general election.

“She (Kindra Stewart-Maturine) is now dead politically as the party cannot afford to select her to run in the next election,” said the party official.

Cox defeated both Maturine-Stewart and former Minister of Climate Resilience, Simon Stiell in a party poll to select a candidate for the 2018 general election but then Prime Minister Dr. Keith Mitchell took the decision to give the nod to the female government minister.

Cox contested the South St George seat in the just-ended general election but lost the race against Andy Williams of the National Democratic Congress (NDC) who now holds the position of Minister of Implementation.