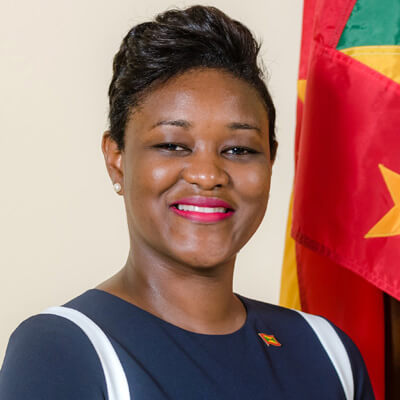 Female attorney-at-law, Kim George has tendered her resignation as a government member of the Senate.

A well-placed source told THE NEW TODAY that Sen. George has submitted her letter of resignation to the Governor General and that the Houses of Parliament have already been notified of the development.

When contacted for comment on the issue, the barrister indicated that she was not willing to speak on the matter at this point in time.

When quizzed about what prompted her to resign as a government Senator  after only two years in the position, Sen. George said: “My answer is the same…I have answered you as best as I should in the circumstances.”

Political observers view this resignation as an end to any hopes the female barrister-at-law had to be considered as a candidate in the next general election in the St. David constituency as a replacement for newly appointed Foreign Affairs Minister Oliver Joseph.

According to an insider in the ruling New National Party (NNP) government, the appointment of Sen. George after the 2018 general election to serve in the upper House was seen as “a positive move” in the search for a successor for Joseph.

He said that at one time Sen. George was being considered for the post of Attorney-General but she was reluctant to leave her more lucrative private practice for a stint in government.

He spoke of the female barrister-at-law having “all the acumen” for upward mobility and progression within the NNP set-up as her father and other close family members are “solid supporters” of the ruling party.

The source said that it is more than likely that Sen. George would be replaced in the Upper House by someone who the Prime Minister sees as a possible candidate for the next election.

Presently, the NNP is without a representative in St. George North-east with the decision of the Member of Parliament, Tobias Clement to cross the floor and assume the position of Opposition Leader.

Speculation is rife that Prime Minister Mitchell is thinking of calling election sometime in 2021 to deal with growing unrest in the country especially among the youth who regards him at 74 as too old to be still in charge of the affairs of the country.