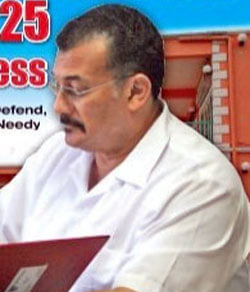 A former Grenada Opposition Senator has thrown his support behind the efforts of the State to bring about herd immunity on the island by getting a certain percentage of the population fully vaccinated against Covid-19.

Businessman Kent Joseph told THE NEW TODAY that he would like to see the entire population get vaccinated in order for the country to be back up and running.

“I am pro vaccine. I support it – I get my two vaccinations already,” he said.

According to Joseph, all of his close family members have already taken the AstraZeneca vaccine which is the only one being administered to Grenadians.

He alluded to the current situation in neighbouring Trinidad & Tobago where the twin island republic is seeing a new wave of Covid-19 cases including a number of deaths.

“It is too close to home,” he said, and referred to the statistics which show that over 200 persons there have died from the virus.

Joseph, a former sportsman in Table Tennis and Bodybuilding said he wanted to use this period when the island has been seeing vaccine hesitancy to send a message to the people of Grenada about the need to get fully vaccinated.

“This is about the nation’s health,” he said, adding that people are falling down dead in Trinidad from the virus and expressed fears that a lot of persons in the neighbouring island might start to come to the Spice Isle and bring the virus with them.

Joseph noted that even some of the supporters of the National Democratic Congress (NDC) of which he is a founding member are against Covid-19 vaccination.

In addition, he said the way in which some of the trade unions on the island are addressing Covid-19 vaccination is discouraging people from taking the two shot jabs.

The businessman who runs Excel Plaza in the south of the island and Homemade Bakery pointed out that while he strongly recommends people getting vaccinated, he was not pushing for mandatory vaccination in Grenada.

The island has seen just over 14, 000 persons vaccinated against Covid-19.

Health officials in St. George’s have been appealing to influential persons on the island including sportsmen to help promote the Covid-19 vaccination initiative.