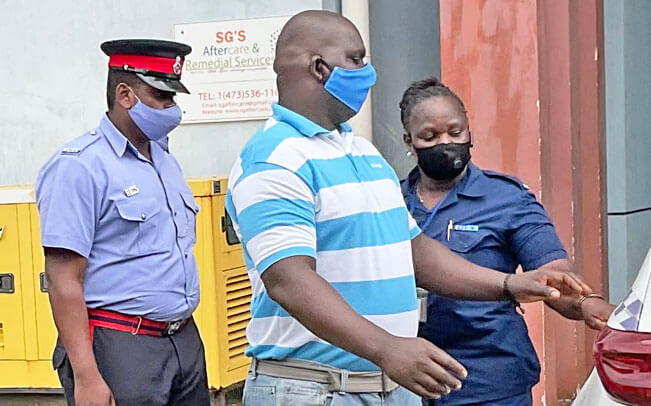 A 12 member Jury has returned a verdict of Manslaughter and not Murder against 30-year old Hesten Mark in connection with the April 28, 2019 stabbing death of Kirt Fraser, 23 of Mt. Craven in St. Patrick.

It was a unanimous decision reached and a blow to State Prosecutors who were pushing ahead with a charge of Non-Capital Murder in the trial which ended just after 5.00 p.m. last week Friday.

The Jury deliberated on the evidence presented by 14 witnesses, including family members and friends of the deceased, as well as some employees of Mega Force Promotions, including its owner Wayne ‘Waggy-T’ Redhead, during Mark’s 8 day murder trial.

The trial was conducted before female High Court Judge, Madam Justice Paula Gilford at the St. George’s No. 1 High Court and the Jury rejected the case of State Prosecutor and Senior Crown Counsel in the Office of the Director of Public Prosecutions (DPP), Howard Pinnock that Fraser died by way of Non-Capital Murder.

The evidence presented to the court confirmed reports that Fraser died after being stabbed by the accused three times in his lower abdomen and upper left chest area with a 3-inch knife, which broke and remained embedded in his body, during a physical altercation that lasted less than a minute.

There were consistencies in the evidence given that prior to his unfortunate death, Fraser and some of his friends had a verbal altercation with Mark, a longstanding security guard with Mega Force Promotions.

The incident between the two men centered on an altercation when Mark was manning the entry gate to the Pure Grenada Cup, which was being held at the Fond Playing Field in St. Patrick.

The accused is said to have denied Fraser and his friends entry into the arena with children’s tickets, which resulted in an exchange of harsh words and threats, which escalated outside the playing field after the event ended just after 1.00 a.m.

The accused took to the Witness Stand to give an account of how the altercation occurred and told the court that as he sat in the tray at the back of the truck that was transporting him and his colleagues after the event on reaching Shirmme shop, someone threw rum and coke in his face.

Mark admitted to getting off the truck to confront the men.

However, he told the court that before he could open his mouth to ask a question, Fraser punched him on the right side of his jaw resulting in him losing a tooth.

It was the argument of his American-trained Attorney-at-law, Jerry Edwin, that at this point in time, “Mark reacted impulsively, forgetting that he had the knife in his hand, which he had used a few minutes before to cut down the last event banner.”

After realising what he had done, Mark and his co-workers went to the nearby Sauteurs Police Station to report the incident, which eventually led to him being arrested and charged and remanded to the Richmond Hill Prison for close to two years.

“I don’t want people to think that I am a murderer that I just walked up to this boy and stab him – that is not me. I wanted people to get my story of what happened. I have been a security guard for more than 10 years. I travel all over Grenada selling goods to shops, I know these people from Mt. Craven,” Mark told the Court.

“I am from St. Patrick’s (and) I do not want anyone to believe that unprovoked, I would just walk up to someone (just) because I am angry and stab them. That is not who I am as a person and I want the world to know that that is not my character,” he said.

Now convicted of Manslaughter, the father of one, faces a maximum sentence of 30 years to life imprisonment, with his sentencing set for March 29.

THE NEW TODAY understands that prior to the commencement of his trial, Mark turned down an offer for Manslaughter from the State Prosecution team, under which a guilty plea would have resulted in a one third reduction on sentencing, according to the sentencing guidelines.

However, his attorney considers the reduced verdict reached by the Jury, as a “tremendous victory” for his client whom he maintains was “incontrovertibly provoked” by the deceased.

“To my mind that is a tremendous victory, huge victory…the fact is, the undeniable and incontrovertible fact is that the young man provoked Hesten Mark,” Attorney Edwin said in an exclusive interview with THE NEW TODAY.

“Hesten Mark did something wrong, yes, but he never intended to cause harm to anybody,” argued the attorney, who expressed optimism that this would augur well for his client in terms of sentencing.

“I know this judge (Madam Justice Paula Gilford) to be an extremely fair Justice and she has sat through this trial and managed the proceedings with great care, both for the family of the deceased and for Mr. Mark and I believe that in the circumstances she will mete out a sentence that takes into consideration that Hesten Mark never intended to cause any harm to Kirt Fraser.

“He was not the aggressor in the altercation…and never at any time when the deceased and his friends were hostile and using words of threats to Mr. Mark, he never said a thing and never reacted, he never lost his cool but if a person receives a punch to their jaw, where they see stars and taste their blood, it is expected that they may lose some self-control and react to the person who has aggressed them and for that I think the judge would be fair to Mr. Mark.

In an earlier interview, Attorney Edwin pointed to the irony of the situation in light of his client’s role as security detail in which he was “a peace maker,” while on duty at these type of events, which he said are known to “attract a level of unruliness from people who attend, especially young men and it is his job to ensure the safety of persons.”