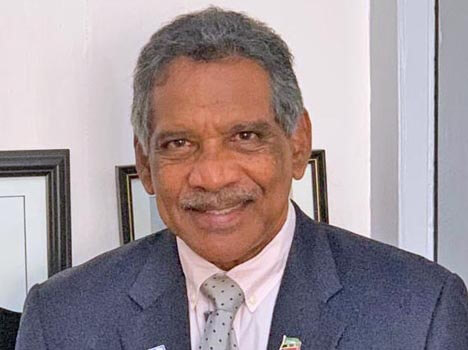 Former Attorney-General James “Jimmy” Bristol who has quit being a member of The Grenada Movement (TGM) has expressed surprise at the ascendency of his legal colleague, Dickon Mitchell as the new Political Leader of the main opposition National Democratic Congress.

“That caught me by surprise – I will tell you that,” said Bristol, QC about Mitchell’s rise to the leadership position in Congress.

The former member of the 2008-13 NDC administration of Prime Minister Tillman Thomas was taken aback by this development involving the 44-year old attorney-at-law from the small village of Petite Esperance in St. David.

“I know Dickon very well – he was never a person out in the limelight in so far as leadership and public service,” said Bristol who on Thursday decided to withdraw from TGM, headed by former Ambassador Dr. Patrick Antoine.

The former AG appeared to give his blessings to the “new trust” taking place within the NDC which has been in the political wilderness for the past 8 years having failed to win a seat in both the 2013 and 2018 general elections.

According to Bristol, NDC seems to be finally “doing something new” as the party was in disarray in recent years and that Mitchell’s entry into frontline politics will do something “good for the party.”

Bristol said he plans to reach out soon to Mitchell to congratulate him on assuming the top job in the main opposition party in the country.

The former chief legal advisor to the Congress government explained to THE NEW TODAY the reasons behind his decision to sever ties with TGM which only became a full-fledged political party in the past five months.

Bristol said he had spoken directly with the TGM leader and informed him of his decision to leave the movement which is currently making plans to hold a convention to elect its first Executive.

“…I only conveyed my withdrawal on Thursday. I had made up my mind over 3 months ago. It wasn’t what I expected it to be – put it that way so I said no (am leaving),” he said.

“It’s not a personal thing but it’s not just my cup of tea. I didn’t see that my efforts will be well spent,” he added.

This development comes amidst reports that three other frontline members of TGM – former Ambassador to the United Nations, Eugene Pursoo, as well as female activists Faye Thompson and Jenny Rapier – are no longer engaged in active political work with the fledgling party.

Thompson did not respond to a WhatsApp message sent to her by THE NEW TODAY.

According to Bristol, who returned to the island a few days ago after a 3-month break, there is nothing much happening within TGM at the moment and that he cannot describe it really as a party.

The attorney-at-law described himself more as “a problem solver” and “a helper” in the political process and not a politician.

“I am a person who knows what to do and how to achieve things. I don’t want to be in politics – I want to be part of change,” he said.

Bristol said when he heard about TGM a few months ago, it sounded good to him and he felt at the time that he just wanted to be part of it.

“It was not what I expected. I thought it was an organisation to jump in and move but it turned out that wasn’t the case – that’s all. It wasn’t really an organisation that was organised and I don’t think it was ready to be effective”.

“It didn’t appear that there were structures in place. It wasn’t an organised organisation. I want to help with people who are really moving and I didn’t get that impression. I don’t have time with that – it is as simple as that”.

The former Attorney-General described TGM as “a bunch of well-meaning people” who are trying to do something but there is no organisational structure in place to excite him.

“I like to see an organisation – if there isn’t a structure that is not for me. You don’t have to be established but you must have a plan and a route to getting what you want to do. I discovered very early on that it is not that – they have well-meaning people, lovely people but there isn’t an organisation.

Bristol believes that he has done enough for Grenada over the years and at his age it was time that he looked after himself and family “so that’s what I’m going to be doing” in future.

He said that he is now finished with public life in Grenada for good while recalling that over the years he has tried “to be a helpful citizen and has paid my dues.”

According to Bristol, he gets the impression that Grenada does not appear to want to move ahead like some of the other islands.

Bristol told THE NEW TODAY that his remarks should not be seen as “an indictment of any individual” within TGM but as an organisation “I don’t think that they are quite ready” because putting together an organisation in Grenada like a political party “is not a walk in the park.”.

He said it was the first time that he decided “to hang his hat in the political ring” with TGM since at the time the main opposition National Democratic Congress (NDC) was in disarray and he sees the ruling New National Party (NNP) of Prime Minister Dr. Keith Mitchell “as a joke”.

He said he saw TGM as something new and fresh and decided “to go for it” with the hope that it will blossom into something viable.

“I didn’t find that – my enthusiasm has kind of hit a wall,” he added.

Bristol also said that his family did not want him to be involved in politics and that contributed to his decision to move away from the party.

Speculation is rife that TGM is grappling with a number of internal issues including the lack of leadership provided to the organisation by Dr. Antoine who is based in neighbouring Trinidad & Tobago and visits the island from time to time and is not engaged in full-time political work on the ground.