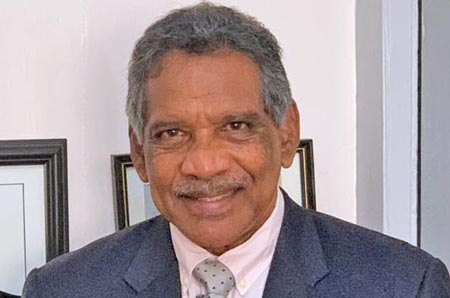 David was on the end of a severe tongue-lashing from former Attorney General James “Jimmy” Bristol who had served with him in the 2008-13 National Democratic Congress (NDC) government of former Prime Minister Tillman Thomas.

The current Minister of Agriculture and Labour was expelled from the Congress party in 2012 along with several others who were accused of trying to engage in activities that amounted to trying to seize power from PM Thomas.

David who held the powerful position of General Secretary in NDC later joined forces with Mitchell and his then opposition New National Party (NNP) to bring down the government at the 2013 polls.

In an exclusive interview with THE NEW TODAY, Bristol said that David has been relegated within the NNP administration to become virtually a puppet serving Prime Minister Mitchell and has no serious input in the corridors of power and the running of the administration in St. George’s.

“He (David) is a puppet. Of course Peter is a puppet. Peter is just there for convenience – that’s obvious. He doesn’t wield any power – he’s just being pushed from pillar to post,” he said.

“I don’t have anything against Peter – I have nothing against anyone not even the Prime Minister. I don’t deal with personalities – I am just talking about the situation as I just see it,” he added.

The former Attorney General who is now a member of THE GRENADA MOVEMENT (TGM) of Dr. Patrick Antoine, said he does not see himself as a politician but one who is committed to helping “to create a leadership that is fair to all the people” living in Grenada and the two dependencies of Carriacou & Petite Martinique.

Bristol gave his blessings to the creation of a coalition of forces involving like-minded persons to come together for the next election in an effort to try and unseat the Mitchell-led NNP dictatorship in the country.

He said: “The worst thing going on in Grenada right now is that we have a dictatorship – truthfully, none of those ministers there have any power. The only minister there carrying any power in Gregory Bowen (Minister of Finance) – everybody else are just puppets and scared puppets at that.

“…We are in a dictatorship – a one-man show and that’s not right. We have to have a change, we have to put our democratic systems back in place, it’s as simple as that – they are not in place,” he added.

Bristol raised concerns over what he said was the tendency of Prime Minister Mitchell to attract persons “with dubious characters” to operate “behind the scenes” in the affairs of Grenada.

“Look at the track record of this government – always dubious characters behind the scenes. It’s always some kind of (conmanship),” he remarked.

The senior attorney-at-law was at pains to point out that he was not pointing fingers at investors such as Egyptian billionaire Naguib Sawiris of the Silversands resort on Grand Anse beach but the likes of Viktor Kozeny known as The Pirate of Prague, E.J Miller who walked away with millions in the failed Mt. Hartman project, and imprisoned fraudster Eric Resteiner who allegedly gave PM Mitchell US$500, 000.00 in a briefcase in St. Moritz, Switzerland in June 2000 as part of an agreed fee of US$1 million in exchange for a diplomatic passport.

When Mitchell lost power in 2008, Bristol along with Director of Public Prosecutions (DPP), Christopher Nelson travelled to the United States and took an oath not to disclose what they saw in a video-recording in the possession of the Americans of the financial transaction between Mitchell and Resteiner.

Dr. Mitchell has consistently maintained that he received “approximately US$15, 000” from Resteiner as reimbursement for travel expenses.

According to Bristol, the current Prime Minister and his NNP regime have been a magnet for attracting “people with a background that is less than honest back in their own countries.”

He also spoke out against what he called the number of “strange persons” being appointed as Ambassadors for Grenada under the watch of PM Mitchell.

“We have had more than our fair share (of dubious characters). It’s all mystery,” he remarked.

Bristol stressed the need for a new government in the Botanical Gardens that can honour the laws of the country, as well as the provisions of the Constitution because “once you do that everybody is going to be happy”.

“Let’s have an open transparent governance following the rule of law, that’s all I say. It’s about simply asking that the democratic system which (is) expected in this day and age be put in place and those that are in place be maintained, utilised and applied.

Bristol called for everyone living on the island regardless of political affiliation to be treated equally and fairly and not the placing of emphasis by the current rulers on those who support the ruling party.

He charged that there was fear in the society under Mitchell’s stranglehold on the country and that “everybody shoo-shoo-ing in a corner because they are afraid to talk.”

“We shouldn’t be afraid to talk man, he quipped”.

“Let’s get into nation building – what we have now is nation destruction,” he said.