After serving for 31 years as an attorney-at-law, James “Jimmy” Bristol has now been elevated to the rank of Queen’s Counsel (QC) to join a small list of local lawyers who are now qualified to wear “silk” in court.

Bristol’s elevation came in a letter from the Silk Committee of the Eastern Caribbean Supreme Court, dated February 4 and addressed to the President of the Grenada Bar Association (GBA).

Speaking to THE NEW TODAY early Saturday on the issue, Bristol said, “I am honoured to be given this accolade which is testimony to my ability as a lawyer and integrity in which I have been practicing law.

According to Bristol, this distinguished award is not given to lawyers on account of their years of service in the profession but more so to do with “how you practice both in terms of the quality of your work as a lawyer and primarily as a barrister before the court and how you conduct yourself both from an ethical point of view within the profession”.

“So it’s really a testimony to that (and) I am really pleased from that point of view and hope that it helps me to further contribute to the administration of justice not only in Grenada but throughout the OECS,” he said.

Bristol who now heads the law firm Henry, Henry & Bristol was called to the bar in England in 1989 and in Grenada one year later in 1990.

He had a brief stint as the island’s Attorney General during the 2008-2013 period in government of the National Democratic Congress (NDC) regime of Prime Minister Tillman Thomas.

The designation of QC status to Bristol came several years after he had applied for it to the Eastern Caribbean Supreme Court but was reportedly blocked by the powers-that-be in the Ministerial Complex in the Botanical Gardens.

When he served as AG, Bristol had visited the United States in the company of Director of Public Prosecutions (DPP), Christopher Nelson to view a videotape of an alleged bribery payment of US$500, 000.00 to current Prime Minister Dr. Keith Mitchell from convicted fraudster, Eric Resteiner in exchange for a diplomatic passport.

Bristol has also had a few squabbles with Prime Minister Mitchell including one on the U.S citizenship status of the Grenadian leader which is contrary to the requirements of persons qualified to sit as Member of Parliament in accordance with the Grenada Constitution.

When he was first elected as MP for St. George North-west in 1984, Dr. Mitchell held U.S citizenship which is contrary to the dictates of the constitution but relinquished it years later when he held the position of Prime Minister of the country following the 1995 general election.

Bristol’s father, the late Carol Bristol who also served as a former Chief Justice of Grenada also attained the title of QC in the legal profession.

Following is the text of the letter from the Silk Committee bestowing the honour of QC on Jimmy Bristol: 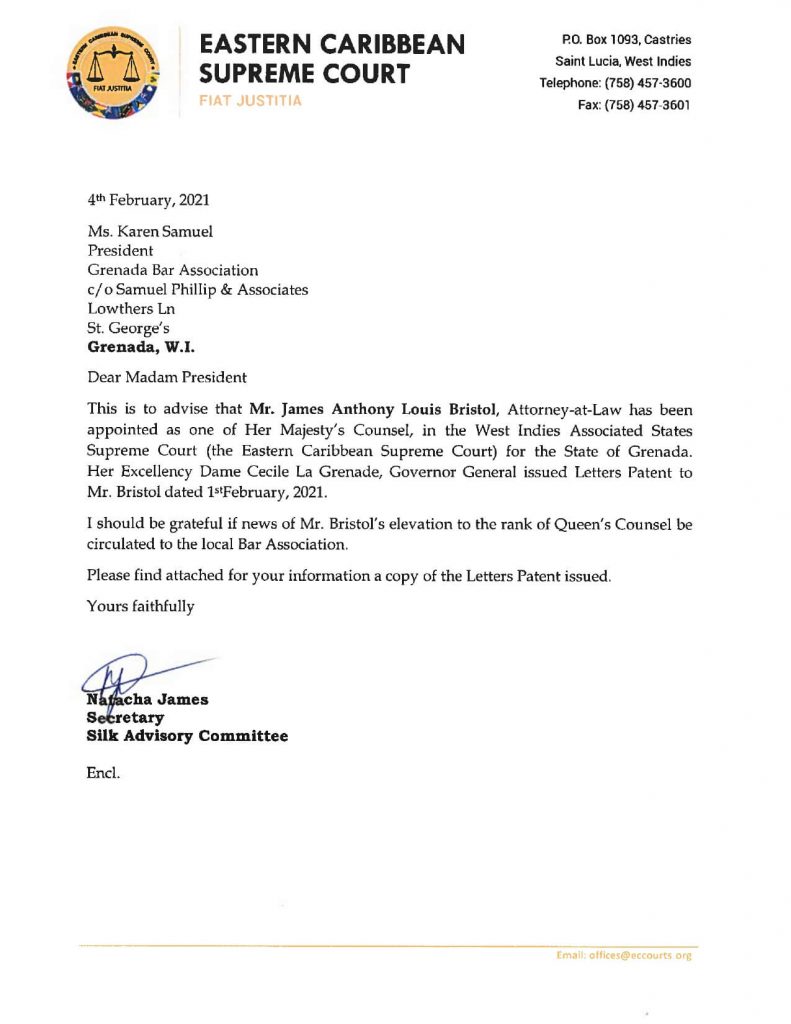 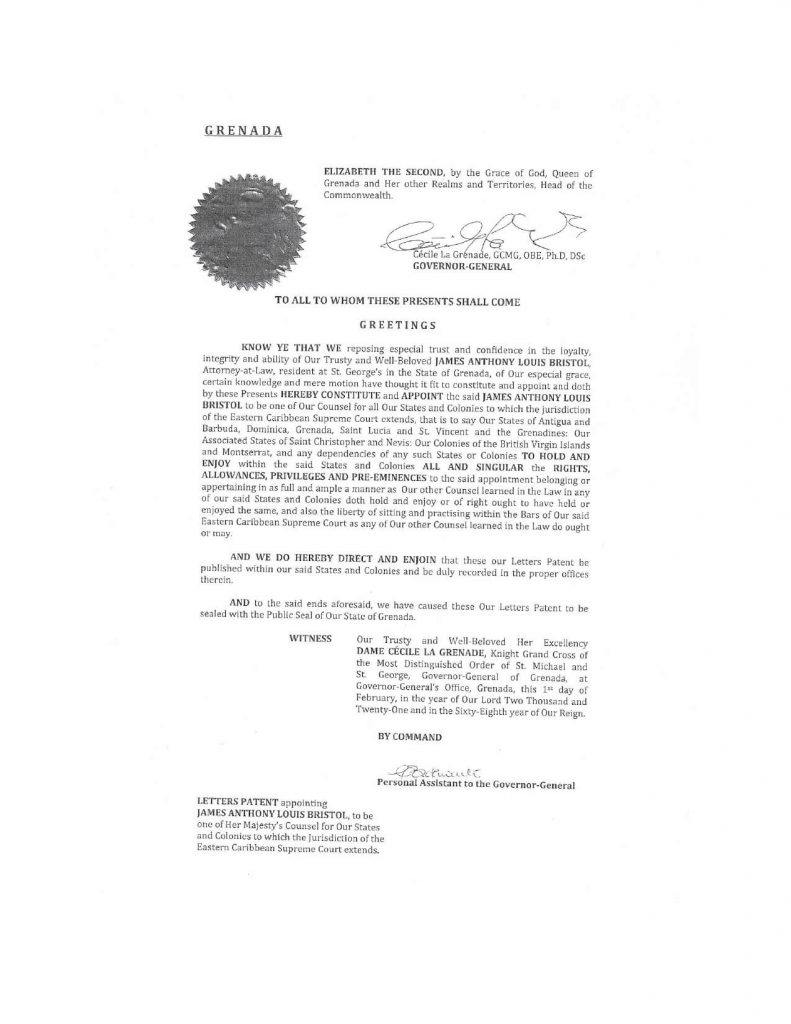 This story  has been updated. Director of Public Prosecutions (DPP), Christopher Nelson is also a Queen’s Counsel in Grenada.