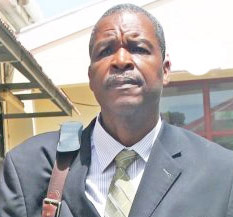 A war of words has started between fiery attorney-at-law, Jerry Edwin and the Royal Grenada Police Force (RGPF) over the July 5 shooting incident in Gouyave in which popular footballer, Jamal Charles was shot in the leg by a Corporal of Police at his home in Gouyave, St. John.

Edwin has criticised the police in the local media over the manner in which the shooting took place and fired a salvo accusing the Policeman of using an unauthorised “Hollow-Point Bullet to shoot his client.

Deputy Commissioner of Police, Franklyn Redhead has hit back with a denial and fingered the attorney at a press conference held by the lawmen for pushing a narrative “purely to direct or misinform the public in a particular direction”.

During the same press briefing, head of the Community Relations Department of RGPF, Superintendent Vannie Curwen expressed concerns that some lawyers were attempting to try matters now the subject of police investigation in the public.

Supt Curwen said that as a former Police Prosecutor in the island’s Magistrate’s Courts this is a dangerous trend which should not be tolerated in the country.

He told reporters: “I have noticed that there has been quite a lot of publicity of matters that are under investigation by parties representing sides of that investigation.

“As a police force we do not have the authority to tell anybody what they could and cannot say in public but I think it is a dangerous precedent we are setting when we set up people to expect a particular narrative or a particular outcome ahead of an investigation,” he said.

According to Supt. Curwen it should be noted that at the end of the day no one knows “what will come out of any situation, we do not know how the court will treat with any particular matter that is before the court”.

“… When we try these matters in public and we sway a section of our population down a particular path and God forbids the court does not adhere to the narrative that is out there, you can see how dangerous that can be with the expectations of our people,” he said.

“While we cannot say don’t do it, I think there needs to be a level of caution here as to what we play out in the public particularly matters that are under investigation or matters that are heading to court,” he remarked.

Trials are for the courts, said Supt. Curwen, and he suggested that the court should be allowed to make a final determination of issues and refrain from playing them out in the public arena.

He said: “Matters that are subjudice – meaning matters that are before the court must be given a chance to go to the court to be determined and not be determined in the public because there can be significant slippery slopes in doing that. It is just a word of advice – even if we do not have the authority to say to anyone don’t do it”.

Attorney Edwin did not take too kindly to Curwen’s statement at the press conference and indicated that the police cannot instruct him that he should not offer an opinion in the public domain on “something that is before him” on any matter.

“…I think Mr. Curwen is capable of doing his work and so am I,” he told THE NEW TODAY.

“…I am not biting from that bone, I’m not drinking that soup. I am an activist attorney, I am a human rights lawyer practicing at the Criminal Bar,” he added.

According to Edwin, that advocacy involves letting the real stakeholders in any case in which “I’m involved in, know what the true facts are”.

As officers of the court, Edwin pointed out that Lawyers have an obligation when they find truth to let it be known inside and outside of the court house particularly when cases are of public concern.

“This (the Gouyave shooting) is a case of deep public concern because the facts are that officers of the Royal Grenada Police Force without a warrant tried to force themselves into the home of a citizen of Grenada. And in the case of that wrongful entry, a young man was shot.

“We live in the real world in which this kind of weapon – this kind of projectile is available in shops in cases to anyone who wants to get them in U.S states like Virginia and Texas. So when someone says that you should not speak and let the investigation continue, I am not an investigator, I am a lawyer”.

The lawyer contended that the Gouyave shooting of the footballer is “a difficult case” for the police when one of its officers is involved and the public have an interest in it.

Edwin warned that there will be some pretty interesting facts that will come out in the Gouyave shooting incident that the public ought to know about.

“We don’t want an investigation (to) come out where the police are giving you one side of the story. We have a myriad of facts we are going to lay out and in this process that is what we are doing – we are going to tell the public the facts from the eyewitnesses because there are two sets of eyewitnesses,” he said.