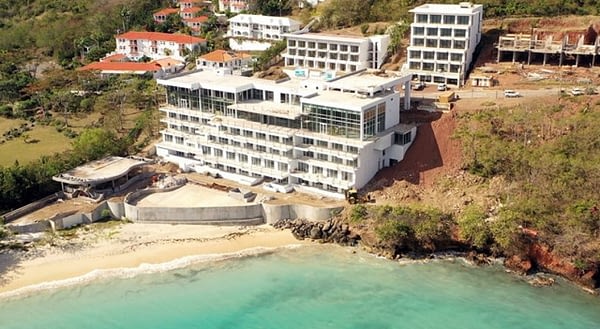 The International Centre for Settlement of Investment Disputes has agreed to hear the case brought against the Keith Mitchell-led Administration in Grenada over the halting of a multi-million dollar luxury resort in the South of the island that could cost the State coffers hundreds of millions in damages.

On Thursday it was announced that the case filed against the Grenada Government by True Blue Development Limited, developer of the US$99million Kimpton Kawana Bay Resort, has been accepted and registered by ICSID, an arm of the World Bank devoted to resolving international investment disputes against sovereign states.

A statement from the developer said, “Despite the Grenada government’s effort to block its registration, the ICSID claim with case number ARB/21/37 will proceed.

“The government will have an obligation to comply with any ICSID ruling from the arbitration proceedings, which is regarded as a tribunal of final resort in sovereign investment disputes.”

Notice of arbitration brought on June 17.

True Blue asserts that the arbitrary and unlawful conduct of the Government of Grenada has thwarted the successful completion of the 5-star luxury Kimpton Kawana on the island, which the government approved in 2017 and lauded as recently as October 2020 as a vital economic development project on the island nation.

The matter came to a head in May when Warren Newfield, the principal developer resigned from his diplomatic post in Miami, issuing a stinging letter in which he accused the Mitchell-led Administration of being anti-business and of not following the law.

The Prime Minister launched his own attack right after, suggesting that there was misappropriation of investment funds and casting racist remarks at the former Ambassador.

Insiders within the Citizenship by Investment programme have said there is no evidence to suggest that there was any wrong doing related to the project on the part of the developer.

True Blue Development Limited is credited as one of the only CBI projects that has adhered to accounting and reporting requirements under the programme.

The developer said this was done despite accepting money from investors for the processing of their CBI applications, adding that, “there is no legal basis for such prejudicial actions and it points to something rotten within government.

“The Government of Grenada continues to show no regard for the rule of law,” said the hotel developers.

According to information from within the CBI programme, a Board member reported to the Prime Minister that they thought Newfield was making a profit on the project and moves to stop further investments were made against the development.

Among documents submitted to the ICSID is a letter from the independent auditor PKF reporting on financial statements of True Blue and the Kimpton Kawana Bay project up until the end of April 2021.

“Construction progress at Kimpton Kawana Bay was at an advanced stage, when last December the Grenadian government started what the developer said is a surreptitious, multi-front effort to squeeze the project into failure,” according to the ICSID notice for arbitration filed by True Blue and the other claimants.

“The official registration of the ICSID filing reflects the essential need to protect investors in Kimpton Kawana Bay from what True Blue and the other claimants say is a concerted scheme by the government to block completion of this world-class resort, which already has more than 92 percent of condominium units spoken for, either through outright purchase or by confirmed reservation.”

Commenting on the matter, Newfield, said, “As heartbreaking and perplexing as I find the government’s turnabout on Kimpton Kawana Bay, we have worked diligently to meet all our obligations, while the Government of Grenada has been deceitful.

“We look forward to the opportunity to prove the Government of Grenada’s broken promises in the now registered arbitration proceedings.”

The arbitration request has been made under a binding 1986 Treaty between the United States and Grenada Concerning Reciprocal Encouragement and Protection of Investment.

The government has not made any public statements since notice was served of the developers’ intention to bring the matter before the Washing-based tribunal.

True Blue and its investors are represented by law firm BakerHostetler, led by head of its International Arbitration and Litigation team, Mark Cymrot who has successfully brought numerous investor-state disputes before ICSID.

“The Government of Grenada has not been candid about its motive for the senseless destruction of the five-star resort project that, even before its completion, has been bringing substantial benefits to the Grenada economy in terms of jobs and opportunity.

“The Government of Grenada has much it cannot explain and we are looking forward to presenting our full case before the ICSID tribunal,” said Cymrot.

Meanwhile, local Attorney at Law Claudette Joseph has said she anticipates that the judgement in this case would be in excess of US$300million given the damages that can result from the actions of the Grenada government.

“This judgement could well be more than the Grenlec judgement,” the female attorney said, referring to the tribunal’s ruling against the government of Grenada last year in a case brought by WRB Limited, the former majority shareholder of the Grenada Electricity Services Limited.

Grenada lost before the tribunal and was forced to pay about EC$200 million to buy back the company from WRB.