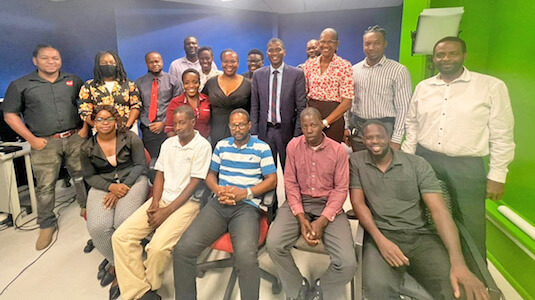 The current members of the GIS Staff in a photo opportunity with their new boss, Prime Minister Dickon Mitchell

The newly elected National Democratic Congress (NDC) government of Prime Minister Dickon Mitchell will soon have to tackle the problem of a high level of incompetence among the staff at the Government Information Service (GIS).

An authoritative source told THE NEW TODAY that a recommendation to remove several staffers for lack of performance was made to the former Information Minister, Emmalin Pierre who also held the portfolio of Minister of Information but she was reluctant to implement it due to the approaching general election.

He said that a private sector person who was asked to conduct the study suggested that about eight employees should be totally removed from GIS as they were incompetent and not up to the job and to deploy them to other areas in the public service.

He spoke of the then senior government minister indicating that it was an election year and the then governing New National Party (NNP) regime of defeated Prime Minister Dr. Keith Mitchell “don’t have the will to do it at this particular time.”

According to the source, Minister Pierre, the re-elected Member of Parliament for the rural St Andrew south-east constituency, pointed out that she “was afraid of the repercussions if they moved persons” out of GIS at the moment.

Two of the eight employees identified for removal from GIS were considered as political operatives – Sherie-Ann Noel and Abigail Mc Intyre – and Minister Emmalin Pierre was told that they should be removed immediately as they are not suited for a role in GIS.

The Information portfolio was handed over to Minister Pierre about two years ago by Prime Minister Dr. Keith Mitchell who held it for most of his 25 years of service as head of the NNP administration.

According to the source, the incoming Dickon Mitchell Congress government should act on the recommendations “in very short time” and to “do what you have to do and get it over with.”

He said the people of Grenada are definitely not getting value for money with the current staff members at the GIS.

THE NEW TODAY understands that the Public Relations Officer (PRO) of NDC, Orlando Romain has been given the task by new Prime Minister Dickon Mitchell to help with the restructuring of GIS and to put it on a much better and a sounder footing.

Romain is said to have already spoken with the Acting Director at GIS, Leslie-Ann Johnson on the way forward for GIS and she has already given him an overview of its operations.

He said that the new government should not delay but move quickly towards the restructuring of the GIS.

Prime Minister Dickon Mitchell who holds the portfolio of Information in the 3-week old NDC administration has already held a meeting with the GIS Staff.