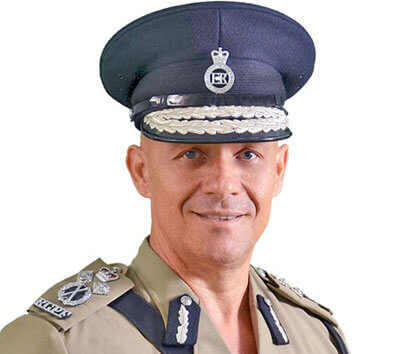 Police Commissioner Edvin Martin – might have some explaining to do

Signs are emerging about a level of disquiet within the Royal Grenada Police Force (RGPF) over the role being played by some of the men and women in uniform to deal with peaceful street protests being staged by teachers against the Keith Mitchell-led government over its failure to honour its commitment to pay them a 4% increase in salaries at the end of January.

A senior member of the force told THE NEW TODAY that the Police High Command should proceed with caution in bringing out onto the streets members of the crack paramilitary Special Services Unit (SSU) and the Rapid Response Unit (RRU) in a show of force against the protestors.

“That is illegal – they should not be doing that,” he said.

The officer who spoke on condition that he was not identified said the role of the SSU in particular is to only get involved in civil unrest and disturbances that pose a threat to national security.

His comment came against the backdrop of fears being expressed by members of the Trade Union movement that Grenada is slipping into “a military state” in the manner in which the police under the command of Commissioner Edvin Martin is trying to handle the protestors under the guise of violation of Covid-19 protocols due to the limited State of Emergency imposed by government in the fight against the deadly virus.

Teachers have been staging many forms of protest action including street marches and night vigils to express their disgust with the failure of government to pay the 4% increase in salaries from the end of January as signed onto in an agreement with public sector unions.

The government is claiming that the Treasury was left depleted by a drop in revenue due to the coronavirus pandemic and payment could be made by December 30, 2021 at the earliest.

In the latest street protest march by the Grenada Union of Teachers (GUT) last week Friday, THE NEW TODAY reporter on assignment saw members of RGPF para-military by the Port Highway, as well as the “Keep Left” roundabout near to the Cemetery by La Qua Funeral home and also on the grounds of the national stadium where the protestors ended their march.

As the teachers were making their way down the Carenage and into the stadium last Friday, a small convoy of para-military personnel including a truck with about 20-30 of them dressed in their military fatigue were seen travelling up Lowther’s Lane.

The senior police officer told THE NEW TODAY it is clear that the tactics being used by the High Command is to put the Para-military arms of the force on the streets to intimidate the protestors and to keep them away from demonstrating.

“If you are having a demonstration the regular police should be dispatched to cover the protest march and not the SSU and other para-military arms of the force. That is how it should be done,” he said.

According to the police officer, the High Command should be dispatching regular police officers with as many firearms as necessary at a discretion to oversee the protest march.

“If you are going to show out the para-military and the military arm of the police force before (any unrest takes place) it is intimidation – it is illegal,” he remarked.

The senior officer indicated that the paramilitary arm of the force like the SSU should be contained in places like the Police Barracks on Melville Street, the Police outpost at the Bus terminal in the city or in the national sporting stadium at Queen’s Park in case they are needed to arrest serious unrest in the protest march.

He said the SSU and other para-military arms of the force could have been sent into these areas the night before or early on the morning of the march but should not be seen by the public.

He insisted that the only members of RGPF who should be seen in and around the protest march are regular police officers but not the para-military section of the force.

“That intimidation should not take place – you should not intimidate workers when they are engaged in peaceful protest,” he added.

According to the senior cop, he would refrain from using the term “militarisation” of the situation as charged by trade union leaders but will rather call it out as “intimidation”.

He said that Grenada is really a peaceful place at the moment and gone are days when locals will resort to violent acts in such a manner that the SSU and other para-military arms of the force would have to be deployed to bring the situation back under control.

Another top military official on the island warned the Police High Command about deploying SSU and other para-military arms of RGPF to deal with a non-existence rebellion since these people are primarily trained to shoot and kill.

“When troops are deployed the next you know is that you will see bodies,” he told THE NEW TODAY.