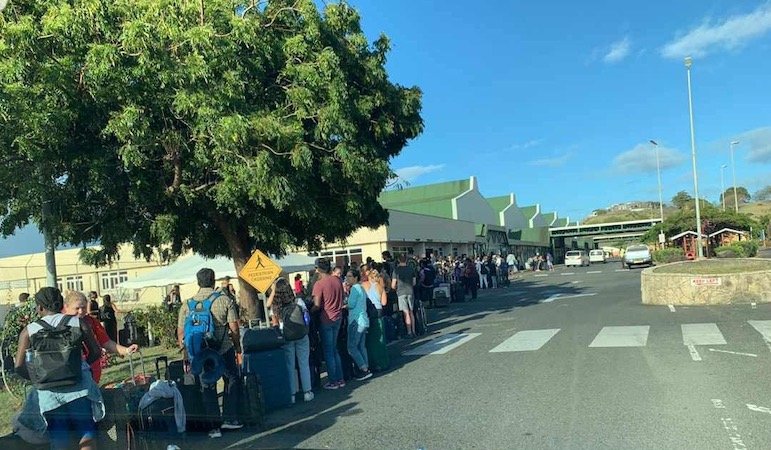 The mass exodus of foreign medical students has started in earnest from St. George’s University (SGU) as fears mount about the possible presence of the deadly coronavirus in Grenada.

THE NEW TODAY has obtained photos of long queues at the Maurice Bishop International Airport (MBIA) from early this morning of students waiting to board regular and charter flights out of the island.

There are unconfirmed reports that five charter flights full of students left the island yesterday for airports mainly in Miami and New York in keeping with the commitment given by the SGU authorities to pay for the outbound flights.

“It had a lot of flights flying out late last night and they were flying out not too far behind the other”, one local close to the airport told this newspaper.

News have surfaced on social media about one person who flew from England to St. Lucia and spent seven days in Grenada at a local hotel who is now a confirmed coronavirus victim in Castries.

Another report out of Canada is that a woman who visited Grenada on a cruise ship just over a week ago is now a confirmed coronavirus victim.

The island’s Prime Minister Dr. Keith Mitchell addressed the nation just after midday yesterday but did not mention any of the two cases.

Several persons took to social media slamming the Prime Minister since they believe that he would have had the information in his possession before the broadcast and kept it away from locals.

A top civil servant who spoke on condition that he was not identified has criticised the handling of the coronavirus situation by the Mitchell-led ruling New National Party (NNP) administration.

He said he believed that the authorities at SGU might have picked up information about the persons who passed through Grenada and later fell ill and took the decision to engage in the mass exodus of students given the limited health facilities on the island to deal with a pandemic health situation.

“The school’s epidemiologist would have done modelling on the possible rate of infection and the number of persons expected to be silently infected (in Grenada) before the general outbreak and made the decision the students have to leave. This was a dramatic and sudden move by the school.

THE NEW TODAY spoke today with one landlord who indicated that she had to refund some of the SGU students who have decided to depart the island in light of the coronavirus fears sweeping across Grenada.

However, she said that one female student was generous enough not to ask for a refund but to pay down half month deposit for her apartment since she plans to return when the situation settles down.

SGU is a critical part of the Grenadian economy and the exodus of the students will affect businesses involved in housing and accommodation, supermarkets, car rentals and restaurants.