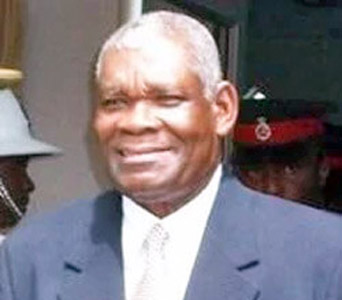 Four days after his death, the former military strongman in Grenada, General Hudson Austin has been cremated at the local funeral home of La Qua Brothers.

THE NEW TODAY understands that the body of General Austin, was put into the furnace at 12 noon in keeping with his wishes.

According to a family member, they now have to collect the ashes from the funeral home, as a church service is planned for him next Thursday at the Bethel Methodist Church along the St Paul’s main road.

“I know that arrangements have been made to have it at Bethel – he didn’t want no service – he said it must be straight cremation,” he said.

“There is no announcement – nothing. The children will have the church service with the ashes – they go bring the ashes to the church, have the service and bury it where he tell them to bury it. I don’t know where it is,” he added.

The family member also went on to say, “You know he (General Austin) was a kind of man – when that man say do that he means do (exactly so).  Ever since HA used to say he doesn’t want any big set of thing and all them kind of thing (on his death) – he used to say burn him or throw him in the sea – you know that was the kind of man he was.”

“He believed when you dead you’re done – nothing to help you. When a man asks for certain wishes – whether you like it or not – it is always best to follow it,” he quipped.

“If they could have cremated the same day he wanted that. It is because of things like getting the death certificate and birth paper to register and then get permission from the Magistrate (that delayed the cremation),” he said.

General Austin was a Methodist Lay Preacher before taking on the role of Commander of the now disbanded People’s Revolutionary Army (PRA) after the left-leaning New Jewel Movement (NJM) used force to topple then Prime Minister Eric Gairy on March 13, 1979 in the first coup d’etat in the English-speaking Caribbean.

It was the ex-Army Commander who informed Grenadians on the night of October 19, 1983 that Marxist Prime Minister Maurice Bishop was killed on Fort Rupert, now back to its original name Fort George, at the height of a bitter power struggle involving radicals and moderates within the then ruling New Jewel Movement (NJM).

Austin, along with former Deputy Prime Minister Bernard Coard, the suspected mastermind of the coup against Bishop, as well as several former government and military officials were convicted for the execution of Bishop, Foreign Minister Unison Whiteman, Education Minister Jacqueline Creft and Housing Minister Norris Bain in an army operation that was ordered by Lieutenant-Colonel Ewart “Headache” Layne.

The General has often maintained that he was not involved in any plan to execute Prime Minister Bishop and told THE NEW TODAY in a November 2021 interview that during the over 30 years spent in prison he realized that he was fed “a lot of false reports” by the top brass of the PRA.

“A few years now I realise that I used to get a lot of false reports including the executions on the fort,” he said.

General Austin stated then that he was not told the truth about the manner in which Prime Minister Bishop was killed on the fort amidst the bitter power struggle with Coard over the issue of joint leadership of the NJM.

Bishop had reneged on a majority decision taken by the Central Committee (CC) of the NJM for the hardline Marxist-Leninist Coard to return to the major decision- making body in the party as his equal.

The General said he was on sick leave on the day of Bishop’s death but was told by the army top brass that the Prime Minister was killed in crossfire after Lieutenant-Colonel Layne had dispatched soldiers to recapture the fort where the late Grenadian leader had sought refuge after a large crowd of supporters had freed him from under house arrest at his official residence at Mt. Wheldale.

He indicated that a female soldier who witnessed the execution told him years later that Bishop along with the three Cabinet Ministers were captured, taken to the Top Square on the fort and machine gunned to death by a Firing Squad.

The General said he also confronted Layne while serving time in prison on Bishop’s murder and his second in command of the army told him that he would discuss the matter with him after they leave prison.

Layne has never made any public statement on the manner in which Prime Minister Bishop was killed.

The Bishop killers were rounded up by U.S and Caribbean troops who entered Grenada on October 25, 1983 to help restore law and order and to pave the way for the return of democratic rule of law in Grenada.