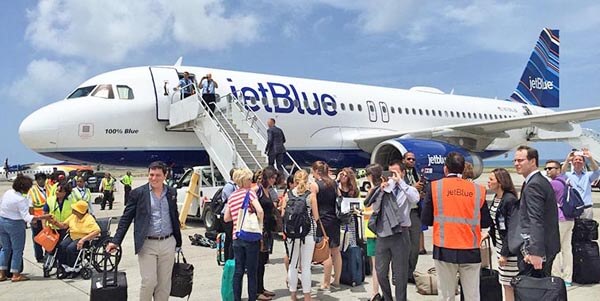 Passengers disembarking a JetBlue flight from New York into MBIA

The owners of several small hotel properties in Grenada are fearful that new COVID-19 protocols put in place by the Ministry of Health from this week will ruin their efforts to build up a local clientele market to help them stay in business.

Two small property owners called THE NEW TODAY to complain that they are not happy with the free intermingling of foreigners who are now allowed to roam all over the property on arrival in the country and locals who visit to engage in dining.

According to one hotel owner, the previous protocol provided for persons coming into the island to be placed in quarantine for a period of time and restricted only to their rooms and not allowed to roam freely on the property.

‘The current rules state that guests may wonder freely around the hotel property – they can go anywhere that they like,” he said.

“The Ministry of Health has told us either we have local people or we have foreigners (but) we cater for both markets,” he added.

The hotelier charged that this change in policy will only defeat the government’s own mantra to them at the onset of the coronavirus pandemic to try and build up a local clientele due to the closure of the Maurice Bishop International Airport (MBIA) in March.

In addition, the Grenada Tourism Authority (GTA) had approached several local properties to take part in its Staycation programme.

Under the GTA-promoted Staycation programme, Grenadians can access special discounts on accommodation, meals, vehicle rentals, island tours, and dives when they register to spend 2 or more nights at local hotels, guesthouses and apartments.

Staycation is a yearly promotion by GTA, in collaboration with its stakeholders, which promotes tourism awareness by incentivising Grenadian people to experience the islands’ tourism product.

According to the hotelier, several properties have been developing the local clientele in order to be in a better position to “stay in business”.

“We did that and now we are told you can choose between the local market and the foreigners. How do we deal with the local business which we were told that we have to develop?

Related Article:  Bristol: Airport Manager and board should be sacked

According to the hotelier, this change in policy by government is more suited for Sandals La Source which is an all-inclusive resort that attracts primarily foreign visitors to the island.

He said this new regime is putting local hotel owners who have built up a local market over the years at a tremendous disadvantage now.

“We don’t see how that (will) work. We have always catered for local people – that’s a big part of our market and so do a lot of the other local hotels.

“How do you equate the two? How do you balance one against the other? And quite frankly with the current protocols it’s impossible.

“…We have to choose basically between whether we want to continue with our local market or we gamble on the foreign market.

The hotelier called on the authorities to relook the new protocol because anyone staying at the property will be there for at least six days until a negative tests allows them to leave the property and go around freely on the island.

He said: “If we allow the tourists and foreigners onto the property they are allowed to walk freely everywhere – and they can stay only on the property until Day 6 – Day 6, they can move out into the community if they are negative.

“The problem is that during those first 6 days we have local people coming here – we have a restaurant where local people dine. We have specials for locals staying in the hotel – the two can’t combine.

He said that nearly all the hotels on the island are faced with the same problem except Sandals.

Hoteliers were due to meet yesterday (Thursday) with a senior minister of government in which the issue was expected to be raised.

The hotelier is optimistic that good sense will prevail and the matter will be resolved quickly.