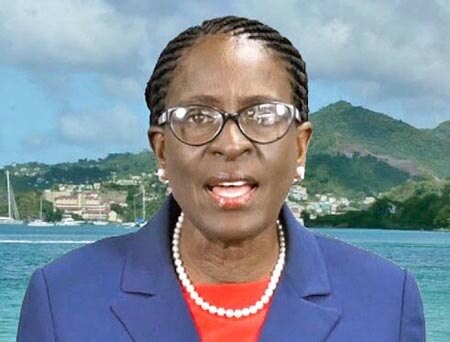 Dr. Clarice Modeste-Curwen was the cheer leader on the Government Side for the resort’s handling of the virus

Grenada will not immediately close its ‘hospitality corridor’ as part of the response to a major COVID-19 crisis that has hit the island because of the arrangement.

The Ministry of Health confirmed a COVID-19 cluster at the Sandals Grenada Resort with infections among guests and employees of the all-inclusive resort.

Overnight the number of cases spiked to 71, up from 42 in ten months, forcing the country into panic and restricted business hours for the Christmas holidays.

Over five hundred people have been tested and following the initial 25 cases there was another spike to forty active cases as of Monday night with more results pending.

The cases have been traced directly to Sandals where 9 guests tested positive and three employees were also infected.

An entire household of thirteen people related to one of the employees, a housekeeper from Port Royal tested positive.

THE NEW TODAY has reliable information that a bus driver involved in transporting staff at Sandals has also tested positive after taking the Covid-19 test on Saturday.

The driver is known to operate on the western corridor of the island.

Grenlec, the island’s lone electricity company also confirmed that one of its employees, said to be an associate of a Sandals Resort employee, also tested positive.

But Health Minister Nickolas Steele has made it clear that he will not order the ceasing of the ‘hospitality corridor’ in the other three resorts which offer the service, despite the risk as demonstrated by the Sandals crisis.

The corridor allows visitors to go directly from the airport to the hotel with no COVID-19 testing or quarantine during their stay on the island.

The ‘hospitality corridor’ was implemented as Grenada desperately seeks to revive the tourism business amid the pandemic.

The situation is being viewed as a major failure of Health Minister Steele who willingly allowed people to enter and stay without testing.

Sandals is one of four hotels where guests do not have to get a COVID-19 test during their stay on the island despite the risk of transmission to employees who then go to their homes and mingle with the wider community.

During a news conference Sunday to announce a major spike in

the number of confirmed COVID-19 cases in Grenada, Minister Steele was asked whether the other hotels will also have to evacuate their guests and cease future bookings.

He said they would not immediately stop the practice of exempting guests from testing in the other three hotels which includes Silver Sands Resort on Grand Anse Beach.

“ There are three others (hotels) that have that criteria. They have not been asked to cease as yet – we have begun testing there as well, just out of an abundance of caution,” he said.

“The issue here is, what we would be asking them to shut down for, what is the issue or the cause?” Minister Steele responded when asked.

However, he did say they will review the model.

“So we are monitoring all of the facilities and it will definitely lead us over the next 24 hours or so, questioning the existence of the corridor based on the information that we have.

“ Those questions have been raised already by us and we will make a determination very quickly on that.”

When questioned about the existence of the corridor in the first place, Minister Steele said it was irresponsible to question the inherent risk involved in exempting some visitors from COVID-19 testing and strict quarantine and defended the resort, saying that they told health officials that they were following the protocols.

Sandals was hailed as a leader in the ‘hospitality corridor’ model by Tourism Minister Dr. Clarice Modeste-Curwen but six weeks later the hotel is now being investigated after it became ground zero for the largest health crisis to face the country since the pandemic began.

The Sandals crisis is the latest embarrassment to be faced by the Keith Mitchell-led administration in its handling of the pandemic, following high praise heaped on the resort by the Tourism Minister just a few weeks ago.

During a post-Cabinet news conference on November 3, Dr. Modeste-Curwen singled out the resort for special mention, saying Sandals is a “vanguard” hotel for the ‘hospitality corridor’.

The public is blaming the health authorities for the Sandals COVID-19 crisis because testing had been waived for all guests and the opposition National Democratic Congress (NDC) has called for the resignations of both the Minister of Tourism and the Minister of Health.

During a news conference Monday afternoon they also called for an independent Commission of Inquiry to be opened by the Governor General to investigate what Public Relations Officer Claudette Joseph called “a grave act of harm” against the Grenadian People.