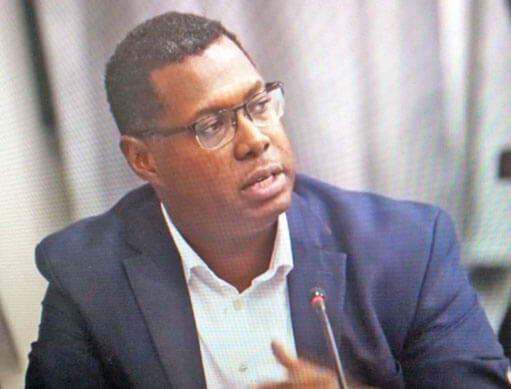 The Grenada-born Attorney General of the British territory of Anguilla, Dwight Horsford has alluded to the changing landscape for social security systems in the region due to the coronavirus pandemic that has created havoc on the economies of the various islands.

According to Horsford, Covid-19 along with the cyclical crises in the world markets and the business cycle over the decades have brought about a new social imperative to which social security seems need to urgently address.

In delivering the keynote address in the DISTINGUISHED LECTURE series in Anguilla hosted by the island’s SOCIAL SECURITY BOARD and the UWI OPEN CAMPUS, the attorney-at-law said it cannot be denied that the Covid-19 global pandemic underscores the inadequacy of the conventional social security and national insurance models.

He noted that since the onslaught of the pandemic, the Social Security Board in Anguilla itself has paid out over EC$10 million in unemployment benefits and related relief to citizens of the British territory.

He called on policymakers to look at what he called a “new imperative” for such schemes as the fund generated “must be sustainable in order to be able to address the urgent necessity for basic economic security during a prolonged public health crisis”.

“This, indeed, must be a risk which, going forward, all social security schemes must seriously consider,” he said.

Horsford warned of troubling times ahead as the world could be faced with more health crisis in the near future.

He said: “The rapid growth of human population in relation to the frightening depletion of natural, food and water resources, coupled with the twin forces of globalisation and climate change, will potentiate the risks of infectious diseases and pestilence of the kind we are now seeing occurring more frequently.

“The impact of the pandemic has been so severe and multi-dimensional that the objective reality is that we must now expand the role of social security to address both economic security and basic health care needs.

“The social security fund which is the people’s money must be deployed in the expansion of benefits to meet the needs of the time. The fund, being a prudential national insurance fund, ought not to be used as a sinking fund for the Government of the day, neither must it be used for political expediency in the application of special community projects.

The former Solicitor-General under the 2013-18 Keith Mitchell-led government in St. George’s said the time has come for reform of Caribbean national insurance schemes including that of the social security system in Anguilla.

According to Horsford, it is time for reform of these funds in Anguilla and the rest of the OECS because “these unusual times that have befallen us require the fund to undergo much needed reform”.

He alluded to a few legislative changes in Anguilla which could also be applicable to the rest of the Caribbean.

“It must at all times be remembered that people pay into the fund their whole lives with the expectation that basic income and pension benefits will be secured to them,” he said.

“The fund must be prudentially managed and at arm’s length from central government, if those benefits are to be assured in the future,” he added.

The attorney-at-law called for consideration to be given to the establishment of national health insurance which could be administered by the existing Social Security system.

He said: “Many other neighbouring OECS territories are considering the expansion of national insurance to cover basic health care guarantees. It is under consideration in Grenada, St. Vincent and St. Lucia, for example.

“How precisely this component is to be funded is an evolving discussion with the public and key stakeholders, as indeed it must be. It may mean, of course, that the private sector will have to participate in this reform initiative with a public option for minimum coverage by the State.

“Naturally, with such a programme it will get rather expensive as costs continue to rise. But, whatever the modality, it can hardly be disputed that we must consider these reform options – we must address basic health care as one of the objects of social security.

“Remember, Social Security has to be sustainable. If the Scheme, whether by itself or through its incorporated subsidiary, is engaged in things like paying for feasibility studies for government projects and purchasing land to secure government transactions and the like, it will lose its ability to sustain the fund.

“There should also be less ministerial intervention in the investment and finance-related decisions of the Social Security Board. The fund is a prudential fund and must be allowed to operate free from such non-trust related political decision making.

“Political influences on decision-making create a fertile source of bad investments and the improvident deployment of the people’s money.

“Any meaningful reform in this regard must be in the direction of removing such political influences on matters of investment of the fund monies.

“Accordingly, there needs to be reform in the accountability and deployment of fund resources in investments.

“Historical experience has shown that when these matters are not carefully and closely dealt with, less than acceptable investment decision making will rule the day. Fund monies would be at risk of imprudent investment decisions which fail to spread foreseeable risks to the people’s money, resulting in colossal losses of fund resources, the people’s trust money, or even the vanquishing of the fund, or the dissipation of the fund in whole or part”.