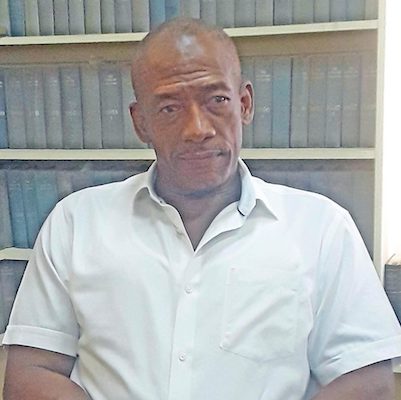 Cajeton Hood – the former Attorney General under the NNP regime

A former Law Maker in the Grenada government believes that disgraced government minister Senator Winston Garraway should step away from his Senate appointment, pending the outcome of a criminal case filed against him by the police.

Attorney-at-law Cajeton Hood, who has been openly critical of the Keith Mitchell-led administration since leaving his post as Attorney General in 2017, said it is improper for Sen. Garraway to continue in the country’s Parliament with the cloud of a criminal trial hanging over him.

The Minister of State for Disaster Management has been charged by the Criminal Investigation Department (CID) of the Royal Grenada Police Force (RGPF) with assault after an investigation which lasted months.

Sen. Garraway is accused of assaulting journalist Calistra Farrier in the line of duty.

Reacting to the news that charges had been laid, Hood said, “I am disturbed that a sitting Senator would have to be paraded in the courts of Grenada, as potentially, a common criminal.

“It is very disturbing. If the Commissioner of Police, who is responsible for law and order, deems it necessary to bring criminal charges against a sitting Senator of the Parliament of Grenada, it means that the Commissioner of Police, using his independent authority has seen the conduct of the Senator to be egregious enough to warrant the laying of criminal charges,” he added.

On the heels of the assault allegation, Sen. Garraway was exposed for parading with a fake Doctorate bestowed on him by a questionable US-based religious college.

He was also stripped of his post as Minister of State for Information by Prime Minister Mitchell.

Hood believes that Garraway should also be relieved from his Senate appointment in the circumstances.

“I am not trying to attack Senator Garraway. I am looking at the establishment. I am looking at how it appears in terms of good order and governance and I believe that the Prime Minister needs to take a decision, while the trial is pending, whether or not it makes sense to have Sen. Garraway continue to serve in the Senate,” he said.

The controversial Junior Minister has maintained his innocence and also spoke on the matter at the last session of the Upper House.