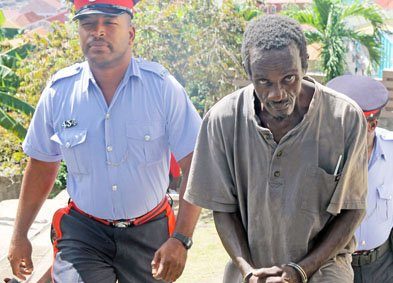 Andy St. John on the occasion of his first court appearance on Tuesday

Two-and-a-half weeks after fire swept through four buildings on Grenville Street in the city, police charged a vagrant for Arson.

The 57-year-old homeless man identified as Andy St. John was remanded to the Richmond Hill Prison on seven indictable Arson charges after he made his first appearance Tuesday before Acting Chief Magistrate Teddy St. Louis at the St. George’s No.1 Magistrate’s Court.

St. John was arrested in connection with two recent fires in the Town of St. George – the four buildings on Grenville Street,and another fire which reportedly broke out at the Anglican Church on Church Street in St. George’s sometime last week.

U.S-trained attorney-at-law Jerry Edwin who was asked by the Chief Magistrate to offer assistance to the unrepresented vagrant described the charge as “a rare case where we see the prison taking on the role of housing.”

Edwin urged Magistrate St. Louis to make allowance for the Court to obtain a psychiatric evaluation of St. John, who often finds himself admitted as a patient at the Mt. Gay Psychiatric Hospital.

There are unconfirmed reports that the vagrant visited the mental institution sometime last week and was days later apprehended by police for the two fires in the city.

Attorney Edwin did not request bail for his client, who he said lives on the streets of St. George’s.

However, he said that this situation highlights a gap in the system in terms of how criminally implicated mentally challenged individuals are treated by society.

“This is one of the rare cases (as) where you would see the Richmond Hill Prison taking on roles of rehabilitation – now we see the prison taking on housing because this man has nowhere to live,” Attorney Edwin said as he made a plea for a psychiatric assessment to be conducted on St. John to determine whether or not he is fit to stand trial in this matter.

The Acting Magistrate agreed to the request and adjourned the matter to February 17.

Attorney Edwin has been a strong advocate against the housing of criminally implicated mentally challenged individuals at the already overcrowded Richmond Hill Prison.

At present there are over 30 mentally challenged inmates at the prison, 13 who were, up to the opening of the 2020 January Assizes, receiving treatment and counseling at the mental hospital.

Additionally, there were two inmates who have been on remand at the Richmond Hill Prison awaiting trial for over 10 years and at least one who was deemed fit to stand trial in the September Assizes and is scheduled for sentencing in the January Assizes.

In an interview with THE NEW TODAY last October, Attorney Edwin labeled the situation as a “human rights crisis” calling for suitable and secured facilities to house inmates diagnosed with serious mental conditions.

He expressed utter disappointment with “the crisis we are facing,” stating that “the Richmond Hill Prison is being used as a temporary Psychiatric centre to house people who are mentally impaired (and) this is totally unacceptable”.

“…(What) our parliament has done, is pass the responsibility of treating mentally impaired persons to the prison, where they do not receive proper treatment and are simply over medicated.

“They (the prisoners) have not gotten their day in court because they cannot appreciate the wrongful nature of their conduct so they cannot be sentenced and cannot even be tried and our law does not have a procedure where a defendant can plead insanity or lack of mental capacity so that they cannot face trial.