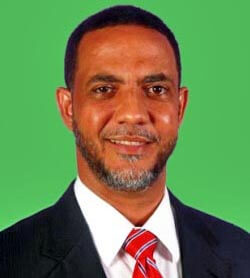 This current situation with the number of cases being identified in the last few days is a clear indication that they (the Ministry of Health) were not following up in a manner consistent with the protocols.

Those were the words of Deputy Chairman of the National Democratic Congress (NDC), Kennedy Roberts following Sunday’s announcement of the 26 new positive COVID-19 cases originating from the Sandals Resort, including guests and employees, and at least two children.

“I am fully aware that in recent weeks there have been complaints from members of the private sector to the relevant authorities about the way in which the Sandals operation has been taking place, neglecting the protocols…and there is enough evidence out there to support this,” Roberts revealed during a virtual Town Hall meeting of the NDC on Sunday night.

Citing the need “for consistency in the way we protect our borders,” Roberts stressed that “we have to ensure that we put livelihoods before profits and ensure that the protocols are followed consistently by all and not to be bias.”

Health Minister Nickolas Steele had informed the nation earlier in the day of the situation and the possibility of further tightening measures related to activities and daily life in order to protect public health and safety of persons from the deadly coronavirus.

The NDC had also released a statement in which it said that transparency is crucial in these times and urged the “authorities not to engage in any kind of concealment of information.”

During Sunday’s virtual Town Hall meeting, NDC Public Relations Officer (PRO), Attorney-at-law, Claudette Joseph expressed concern that “no provision was made in the (2021) budget for strengthening our borders.

“We have had lapses, resurges, breaches but nothing is provided for in the budget to strengthen the borders, no investment in that regard (and) today the Minister of Health says boldly, that under no circumstance we cannot afford to close our borders,” she said.

“So, here we have it – the government putting our lives at risk, reading a budget not making any provisions to strengthen the borders… yet we still have very few ICU (Intensive Care Unit) beds in Grenada (and) we still do not have a designated hospital space for COVID-19 patients…. unlike in other more responsible governments around the world that designated a space,” she added.

Joseph expressed her disagreement with the current use of a section of the St. George’s General Hospital for COVID-19 emergencies by government.

She also placed on record the NDC’s expectation from the Keith Mitchell-led administration in going forward in the fight against Covid-19.

“We expect our government to be more diligent in protecting the health and safety of we, the citizens of Grenada within the borders because as we indicated in the (NDC) statement, by and large the people of Grenada complied with the protocols and restrictions that were put in place since March and continuing and that contributed a great measure to the success that we have had containing the virus in Grenada.

“ As a matter of fact, had it not been for the reopening of our borders without the necessary precautions being applied rigorously, we would be quite relaxed in Grenada, especially going into Christmas season, especially since we had to forgo and understandably so, the Carnival season (and) we now have to restrict ourselves more.

Consultant and Data Analyst, Curlan Gilchrist, who was one of the speakers at Sunday’s NDC Town Hall meeting, expressed the view that the new COVID-19 threat should serve as a “wake up call for us and for those in authority as they attempt to forecast the future (and) put a budget together to deal with the limitations and the challenges that our people are facing now and would face next year.”

Pointing to the country’s heavy reliance on imports for revenue, with approximately “80% of foreign exchange earnings attributed to the tourism sector,” which saw significant decline due to COVID-19, Gilchrist said, the fundamental point is “that while the budget and the authorities (are) attempting to give hope, that hope must be based on substance and reality”.

“…If you look at the budget, my worry is that it is not grounded enough on the economic realities of Grenada, Carriacou and Petite Martinique and because of that I am of the strong opinion that the risk is so high going forward that unless the authorities take stalk, Grenada would not build the kind of resilience we need to build so we can deal with the traumas and these events that would shock the nation, whether it’s health”, he said.

“…We have this health issue now but it could be something else – so it’s not just (about) climate change but (also) about economic resilience and health resilience,” he added.

According to Gilchrist, a former senior employee in the Ministry of Finance, “the budget was framed as though in 2021 we get back to some sense of normality, ignoring that the pandemic is still raging in some of our major trading partners, especially in the areas of tourism”.

“I think that that optimism was too optimistic. I think the government took a risk by putting that budget in such a manner to say hope but the realities I think would embarrass them.

“…I hope that the government would take stock of the realities and make the (necessary) adjustments to the budget so that the people would have more confidence that they can rise from this recession of slow economic activity that we are in”.

The 2021 budget allocates a sum of EC$94.9M, for the Ministry of Health and Social Security, which represents 7.7% of the total expenditure announced in the EC$1.2 billion budget.

In an earlier interview with THE NEW TODAY, Health Minister Steele stressed that the budget is fitted to cushion and support the effects of the pandemic with monies set aside to improve the administration of health care services.

He said: “The Budget recognises the importance of health and health care (and) has put the appropriate funding in to the necessary areas in healthcare…to allow us to address the threat of COVID, but still recognises that it is not the only threat or challenge of healthcare and has (also) given us appropriate funding for other areas allowing us to advance our initiative on National Health Insurance, dialysis (and) imaging.”